Neerob, Or A Bangladesh Bronx Lunch

I traveled an hour and a half for lunch, which seems insane until you consider my destination: Neerob, New York’s most famous Bangladeshi restaurant. As Dave Cook writes in his review for the Times, “good Bangladeshi cooking is hard to come by in New York.” Switching from the 1 to the 2 to the S to the 6 (Parkchester Local) to the 6 (Pelham Bay Local) is, in my estimation, a fair price for an exceptional meal. I convinced two friends to come along; I studied Serious Eats, Chowhound, and the other relevant scholarship on Mohammed Rahman’s cooking; I bundled up in a barely heated subway car and read graffiti on abandoned auto shops, eavesdropped on audio backwash, scraped gum off my shoe and buffed fingernails on my canvas jacket. It’s 2012 and the Bronx isn’t burning, but buildings and faces still show scars—hard, shiny, wounded surfaces covered with keratomas, knotty swellings of numb trash growing on shop windows and noses. Across the subway aisle, a man watches me the whole trip, eyes almost closed, head plugged with earbuds, secure in his hostile indifference. At the last stop, he disappears down the stairs and we—Jason, Frankie, Wally—are alone on Westchester Avenue. The street is empty, except for cars speeding towards the Cross Bronx Expressway and three white boys running across traffic.

I am a cowboy in the boat of Ra

Statistics: I have driven five hours thirty-three minutes for the best buckwheat pancakes in the world. I have ridden the subway two hours for borscht. I have walked ten miles for barbecue. I have ridden my bike thirty miles while eating four doughnuts. I have snorkeled down the Black River before feasting on fried chicken. I have run a marathon to drink a carton of chocolate milk.

When calculating the value of an eating experience, it is imperative to consider the factor of displacement; that is, distancing yourself from home amplifies the pleasure of a meal, because working hard whets the appetite. Prove to yourself that you deserve a taste of fatty goat, and every taste tastes better. Labor for curry, love curry more. Force applied over distance displaces the subject from his normal self: we traverse the gradient of most resistance in order to reach new worlds. To move from familiar to alien is to intensify the saturation of sensuality.

I’m going into town after Set

Yet, our eyes see technicolor where more sensitive organs perceive shades of gray.  Even as we sketch a fantasy over ordinary life, assuming diplomatic immunity, ordinary lives deign to look back. Spectator and spectated intertwine in a sequence of reciprocal gazes and postures. In each moment of watching, the balance of power is renegotiated. Image oscillates between object and subject; occasionally, it opens its eyes against the picture plane.

Beware becoming imprisoned in a fallacy of newness. If few places remain undiscovered on Earth, few people are fully insulated from the cold. It is too easy to imagine the unknowable as unknown and blinkered—incapable of returning the spectator’s gaze.

As soon as they place the spectator in the field of their gaze, the painter’s eyes seize hold of him, force him to enter the picture, assign him a place at once privileged and inescapable, levy their luminous and visible tribute from him, and project it upon the inaccessible surface of the canvas within the picture. He sees his invisibility made visible to the painter and transposed into an image forever invisible to himself. (Foucault, The Order of Things)

Although aesthetic enjoyment need not imply objectification, ethical travel requires a recognition of the new world as always old. The distant and displaced possess their own, independent animation—personal and particular lives, known to their inhabitants. Respect is the only appropriate response to that which appears strange.

Back to your regularly scheduled programming: Neerob: a small cafeteria-style-joint, five tables maybe, Mr. Rahman manning the steam table and eating his own lunch (rice and a basket of naan): all tables filled with local Bengali speakers, the register crowded by a giant punch bowl of gulab jamun: like sitting in a home kitchen, incredible proximity between counter and customers, anti-claustrophobic closeness, just tightness against the bitter wind. Greasy pakora hit the table as a hello (with Mr. Rahman’s broad smile)—order at the counter, and most definitely defer to the house. They know what’s good, not you. Sutki bharta, a stinky sweet mash of fermented fish, is not for the cowardly. Then again, if you’ve come this far, you probably aren’t afraid. Pick curried fish flesh off a perfect skeleton; enjoy every forkful of goat biryani, taking care to suck pungent fat off bones. I like the naan plain, or with a smear of black paste (unidentified; apologies: details not forthcoming), a sinus-clearing trip from the Bronx to Bangladesh and back to Bronx and backtobacktoback—be careful not to bite off fingertips before reaching for more bread.

Afterwards, we need an hour in Starling Coffee Shop to settle down. We drink milk tea and eat coconut stuffed pastries. Eventually, we feel plump enough to crawl into the January afternoon.

My explicit point here is that it pays off to take a long train ride to lunch, if only for perspective on business as usual, AKA the routines that stifle creative and poetic life. 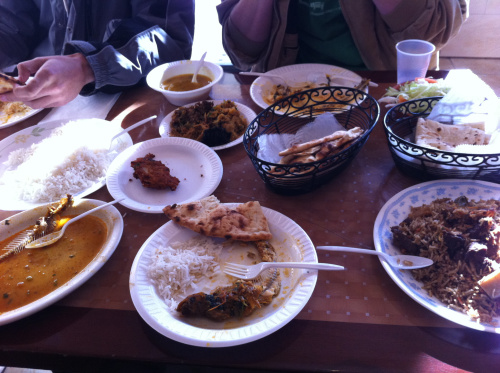 Journeys to the BronxIn "Dining Suggestions"