I feel compelled to comment on Jin Ramen, a new restaurant located between Tiemann Place and 125th Street on Broadway. Although I have become disenchanted with the generic conventions of “restaurant reviewing,” I would like to offer a few notes on my experience at this addition to the Columbia family. The take-away: Jin Ramen is not nearly as wonderful as its downtown competitors—Ippudo, Totto Ramen, etc.—but its the best we Columbians have. END_OF_DOCUMENT_TOKEN_TO_BE_REPLACED

Having a spare hour or two in the afternoon, I decided to braise a whole pork shoulder for dinner. Although I run a lot, I could count on the help of a few friends—six to be precise—to finish off the beast. Pork shoulder is intrinsically delicious (oh fat, oh crispy skin, so the ode proceeds), cheap ($1.99 a pound!), and extremely easy to cook. In fact, I left the shoulder in the oven for two hours unsupervised during my evening class. No harm done. It does, however, require time, and time’s attendant, patience, for a proper preparation. Do not undertake a pork shoulder roast lightly: it is not a dish to be trifled with. END_OF_DOCUMENT_TOKEN_TO_BE_REPLACED

Marathoning: A Ten Minute Reflection on the Ordinary

A ten minute writing exercise for a class I’m taking this semester, Ordinary Romanticism. The prompt: describe your ordinary.

The ordinary is the space in between steps, breaths, heartbeats—the inexplicable pause in flight as one hamstring stretches back, drawing bands of tendon across kneecap and retracting the foot in one long arc, the other thrusting forward, a transformation of flesh into energy, body translated across space. Running (every morning) begins in the gray fog of the Hudson, where I can barely detect outlines of old docks and a crane poised to rip rotting timber from the water. I live in Morningside Heights, close to Riverside Park and a few jogging paths, so I step outside and start running immediately, allowing the urban and the real to recede in my peripheral vision. When I am running, by the river, in January, my imagination flickers like a projector running scratched film. For an instant, I run along the Charles, another, a beach in South Carolina or Greece, or sometimes I return to the Cumberland—last summer, I injured my knee and could not run, only walk, past the Country Music Hall of Fame to the Cumberland Greenway. I enjoy revisiting that site of defeat and running past my tired and hurting, ancient, memorialized self.

If ordinary is defined in its negative term, that which is not extraordinary, then running is a paradox. It simultaneously celebrates an expression of the body extraordinary and frees the mind to fixate on nothingness. In The Temple of the Golden Pavilion, Mishima describes the world as beautiful only in its reflexive state: as illuminated on a pond, in the moonlight, or reflective of the titular structure itself. Similarly, running and the ordinary are beautiful and coterminous because they capture the permanence of impermanence: the space in between the spokes, where the usefulness of the wheel can be found. And it is in the space between strides that the body and mind are, spiritually, in a state of ordinary perfection.

The Phenomenology of Bagels

When I arrived at Columbia, the first thing I did was drop my bags in my new dorm room. The second thing I did was stand in line at Absolute Bagel for twenty minutes. 9:38 a.m. and it was time for breakfast, a meal that reasserts its persistent necessity every morning hour. Since I eat breakfast three or four times a day, I like to try novel dishes. A serving of Pride and Prejudice, a scoop of cheesy grits, and a generous helping of The Red and the Black, green figs, yogurt, coffee, very black. Enough for first breakfastses.  There’s a new item on the Absolute menu, a whole wheat everything bagel. I ordered it out of psychotic compulsion. Waiting to fork over my greasy creased $1 bill, I palmed the brown paper bag: baby’s breath hot, an auspicious sign for crusty bagel skin and steaming doughy meat. After a three month stretch of sobriety, a New York bagel fix felt so wrong, felt so right—on the sidewalk, I dragged the bagel from its bag and took an eyes-closed bite. Grunting in pleasure, I weaved between pedestrians oblivious to my Absolute high. I liked it. My dendrites untied their own knots; my fingers flexed off onion garlic and sesame scent like a ballerina unlacing pointe shoes from ankle to metatarsal, unwinding pink ribbons in little curls around the thumb.

Bill Livant, author of untidy Marxist monologues like “The Dialectics of Walking on Two Legs,” published a piece in Science & Society titled “The Hole in Hegel’s Bagel.” END_OF_DOCUMENT_TOKEN_TO_BE_REPLACED

My first experience with roti—the famed flatbread of India—actually occurred at a Thai restaurant in Midtown. Crispy and unleavened, the roti was served as a dessert dish, drizzled with warm, condensed milk and rolled up like a Hot Pocket (though thankfully more delicious). Since then, I’ve craved roti in whatever form I can find: with curry and cooked vegetables, or, my personal favorite, with scraped coconut and Nutella. Luckily for students of Columbia University, Roti Roll Bombay Frankie—a small, nondescript storefront on Manhattan’s Upper West Side—offers a variety of relatively cheap “frankies” (basically burritos) that will satisfy your Indian fix any time of the day (Roti Roll is open from 11am to 2am). 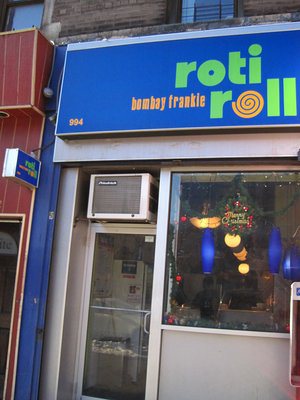 END_OF_DOCUMENT_TOKEN_TO_BE_REPLACED

While eating breakfast this morning at Deluxe, I watched a man step behind the bar and start fiddling with the shake machine. I always sit at the counter, so I saw him grab a jar of Skippy Peanut Butter and a tub of Marshmallow fluff. Finishing off my three eggs, potatoes, and toast, I heard him chatting with another diner. “This is a special shake,” he explained, adding milk and a dash of chocolate syrup to the silver shake canister. “And no, I don’t work here.” “Anymore,” he added, grinning like a lazy cat as he processed his magic mix. He poured off two shot glasses worth of the Marshmallow Peanut Butter Chocolate Shake and handed one to me. END_OF_DOCUMENT_TOKEN_TO_BE_REPLACED

There’s a tiny door in Community Food & Juice that takes you inside Josh Ozersky. You see the world through Josh Ozersky’s eyes, and then after about 15 minutes, you’re spit out onto a ditch on the side of the New Jersey turnpike.

“This is another example of the artisanal version being worse than the ShopRite Bakeshop version. Well, I’m very disappointed in myself and in my inability to appreciate good things.” Josh Ozersky takes mincing bites from a “Dough” doughnut, grimacing in disgust. Safely removed from the owner’s gaze, Ozersky samples each variety and, like a petulant child force-fed broccoli, bemoans his not-so-sweet desserts. “It should be sweet,” Ozersky says. “Life is too short for savory doughnuts.” Famous for effusively praising certain chefs and products, Ozersky  rarely meets a food he does not like.

Dough, a bakery in Bed-Stuy  serving fancified doughnut flavors like hibiscus and “real” chocolate (no cocoa powder here), applies an artisanal ethos to simple breakfast fare. Ozersky does not lament that ethos per se, but instead criticizes its consequence: an unpleasant doughnut.  Ozersky describes the problem of hipsterfied and fancified food well—oftentimes, it just doesn’t taste good. Although I enjoy a Doughnut Plant creation as much as the next easily impressed sweet tooth, I appreciate the doughnut’s humbler forms, too. Like Ozersky, I’d rather eat a tasty doughnut than a doughnut with pedigree any day.

heavy as the dough o’s rising
out of the vat of grease.

Outside, the whores are whistling
their one note, lips thick

The artisanal doughnut feels deeply ironic—a perverse distortion of an American symbol. Whereas doughnuts once represented the seedy, too-sweet commodification of American life, now artisanal bakers viscerally reject that formulation. Of course, the artisanal doughnut embodies a bourgeois ethic, a mode of consumption that signals class separation. Dough is a product and producer of gentrification in Bed-Stuy and its wares emblematize class categories. An affordable and deviously unhealthy food made unaffordable—the violence of exclusion seems unavoidable. In an attempt to escape a sordid aesthetic, Dough reifies the latent divide between “have” and “have not.” To be bourgeois is to eat an artisanal doughnut; and the transformation of the doughnut from ShopRite to the imperative “eat right” extracts class from everyday consumption.