My most restful nights have been by the sea.

I can sit on a vinyl recliner and let the air wash my face. The sea air is delicious and full of extra oxygen. It is especially nutritious and satisfying to breathe. The wind lifts ancient minerals off the waves. They trickle through the nasal epithelium and tickle the brain. My lips tingle. My most restful nights have been by the sea.

If you start from Coney Island and follow the sea you will eventually find Brighton Beach. Last Saturday looked Moscovian. Gray and white clouds dwarfed the sand and sucking waves. Highrise apartments were flat prints on the skyline. The subway lurches across metal stilts and shelters beneath its pantaloons a romantic avenue of liquor stores, groceries and restaurants and fruit markets, Soviet electronics, cell phones, CDs and VHS tapes, souvenirs, dance halls and nightclubs, cheap insurance, doctors, etc. An alternative universe has budded off the train and dangles, contained by its own surface tension—two blocks away from the umbilical bubble, you are in dark uterine trenches, suburban, overgrown and peeling like seashore homes tend to during unseasonably cool summers. Even compared to Flushing or Sunset Park, Brighton Beach is glowering and mysterious. With less friendly teenagers and more grumping octogenarians, maneuvering through the barricaded shops can be stifling. Frankly, if you are young and hanging out you considered a threat to general order and unwanted. Although we encountered  welcoming and interested faces, we also met rude clerks who wanted nothing to do with a few Russian Jews strung out along a genealogical strand. When exploring this neighborhood, the intrepid cosmopolitan must prepare for the best: confusion and outright hostility.

At Varenichnaya, my brother, Frankie, and I ate Ukrainian borscht, plumped with chicken and cabbage, and buttered Siberian pelmeni (porcelain thin skins stuffed with meat) and vareniki filled with mushrooms and potatoes. As we drank our first cups of tea—many would follow, pots of tea to fill the day—we shared a plate of cherry vareniki, dressed with syrup and sugared sour cream.

Before Frankie arrived, we visited Georgian Bread and asked for khachapuri: we were hungry and no Frankie to speak of!: but no khachapuri either, a 50 minute wait, the baker told us. After lunch we returned to Neptune Avenue, a viscous and quiet street like a spoonful of pekmez. How viscous and quiet and slow is a spoonful of pekmez? Why, I’m not sure—my jar of pekmez, grape molasses, remains unopened on my kitchen counter, along with a suspect bottle of semisweet Georgian wine, khvanchkara, wrapped in a burlap sack. On our second try, the khachapuri was finished, and we bought a loaf. Inside Georgian Bread, the air smells like rising yeast and cheese and sweat. The bare lightbulbs and ovens draw swarms of luminescent heat like crawling beetles to a camping lantern. Everyone sweats and argues. We took the khachapuri to the beach.

On my last trip to Brighton Beach, I randomly slipped into Cafe La Brioche. I wanted to go back for smetannik, a layered cake frosted with sour cream. We brought that to the beach, too, and ate it with our fingers while we watched two bearded boys toss an American football. Twelve layers in all with dates and a crumb topping, but worth it for the hassle, the glare of clerks impatient with my hasty mispronunciations? I wish I could recommend La Brioche as worth the ordeal.

We browsed for vodka and Russian paperbacks. I ended up with a pound of kielbasa, sliced thin for sandwiches, dry and greased with beef tallow, and a veal tongue. A hike to Coney Island and back consumed an hour or maybe less— time wavers like a thin flame in these neighborhoods so far from home. Eventually, we sat in a park and ate the tongue, slice by spongy very fatty slice. We drank kvass, a yeasty raisin soda far more refreshing than it sounds. Platinum blondes, wrinkled like old dirty dolls, gossiped in the shade. Pick-up basketball games played in the background. If you pluck images from an animated film in quick succession, they will appear identical—and so, this scene in Seaside Park was interchangeable with other June afternoons, but indelibly watermarked with its momentary peculiarities: the bounce of a jumpshot off a stiff rim, the squeal of spent sneakers in harmony with a queer Russian phrase, the faint crackle of a boombox down the beach, out of sight.

Frankie left for home and we needed a bathroom and drink. Neighborhoods like Brighton Beach will satisfy your desires, if you let them. We walked into Elza Fancy Food and had a piss, green tea, cucumber pickles studded with coriander, and chim-cha. Elza Fancy Food serves Korean-Uzbek cuisine, and chim-cha is a kind of kimchi, buzzing with ferment and red chili.

We followed Brighton Beach Avenue until it turned into Manhattan Avenue. The houses change from battered bungalows into brick mansions with iron balconies, topiary gardens, and many silver Mercedes sedans. It was Father’s Day. I could navigate blindfolded between homes with only the smell of charcoal grilling for guidance.

Menorah Home & Hospital guards the eastern edge of Manhattan Beach Park, which is the joint of Brooklyn’s pinky finger. We sat on a bench and looked across at Breezy Point. A frosted cruise ship floated to sea. I longed for the deep water, for being the still point in a solitary, rotating sphere of sensation. The open sea is a desert, inhospitable to man. But from shore, it seems no more threatening than a sunken swimming hole. By Manhattan Beach, the water is the color of Bruegel’s “Landscape with the Fall of Icarus,” a stony green, a lawn of Kansas bluegrass. I took a breath and shut my eyes, intoxicated and so at peace in the presence of something terrifying, like the brassy climax of Debussy’s La Mer or the splash of a youth diving to his death. I was awash in pleasure.

My most restful nights have been by the sea.

Already sated but physically hungry, we retraced our steps to Cafe Kashkar. We drank our third and fourth pots of tea, black, poured into shallow china cups patterned with mountain flowers. Cold eggplant, red peppers, and carrots came drenched in oil, perfect for dredging with a fresh loaf of naan, a crusty flat bread dotted with sesame seeds. We ate chopped lamb ribs with our fingers, brushing off charred fat with persistent tongue strokes, finding the bones buried deep in the meat. Unlike the repressed WASPy (bland, blasé, oh bad) Manischewitz-glazed lamb we had at Torrisi Italian Specialties, Kashkar’s lamb kebabs taste visceral and really pungent and seasoned with cumin. Veal liver kebabs hold nothing back, too, dense, ferric, gorgeous in a spicy tomato sauce. For dessert, our waiter brings us chak-chak (çäkçäk), deep fried dough drizzled with honey. Midwesterners, the Tartars of America, will recognize chak-chak as a cousin of funnel cake. Or a baklava confident enough to let honey speak for itself. Bunched into complex, twiggy nests, the pastry will disappear in a hollowed out mouth, pursed to kiss or puff shisha, leaving a dusky warm waxy residue.

I think I would like to run on Brighton Beach, barefoot, so the splintered boardwalk could slap my soles. My lungs would blow out like bronze conch shells, and the sand would crust my roots and beat my hair blonde. Then, I would sleep, motionless, letting the surf labor against my back. From the train, leaving, I can see pitched roofs against the sea. Already, the air, wheezing through the subway grates, stings my throat. Yet I can live, for a time, on the thought of the sea, a few miles South, waiting in spirit for my future self. 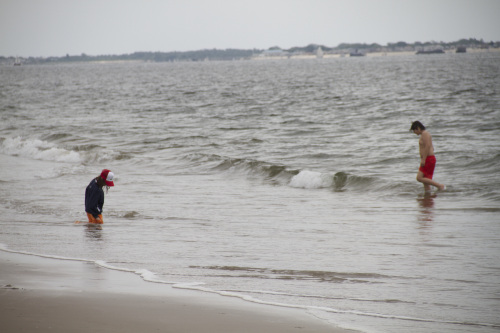 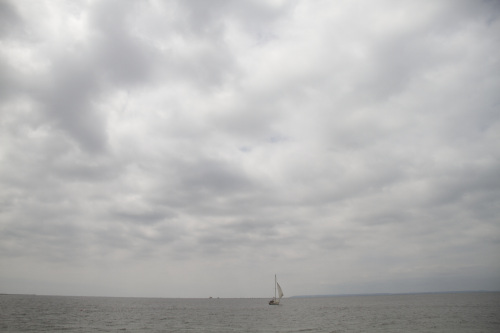 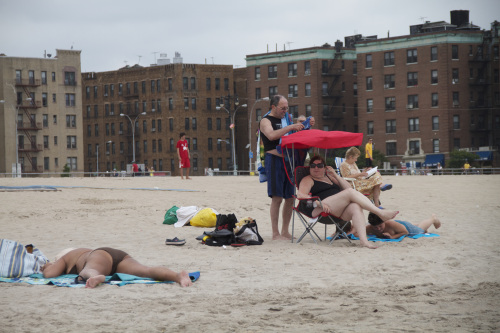 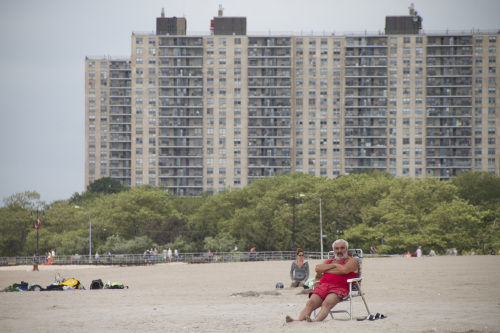 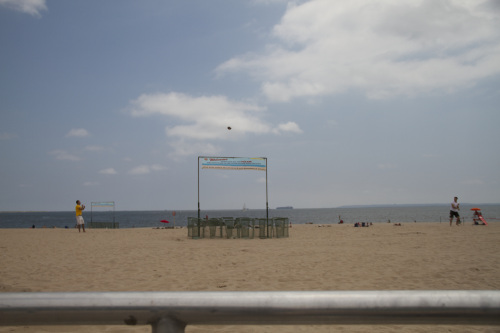 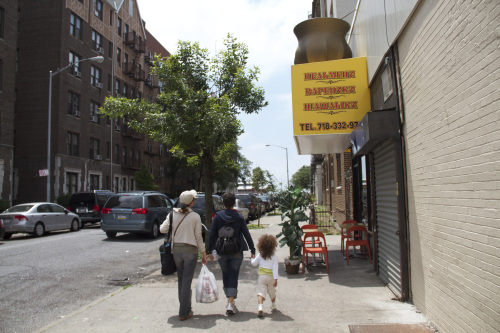 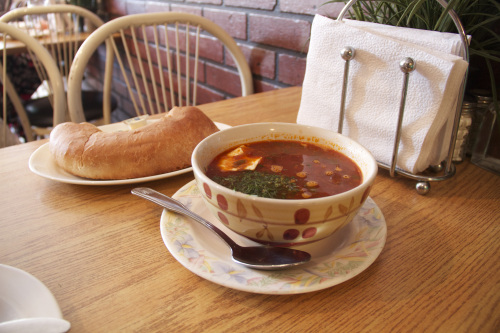 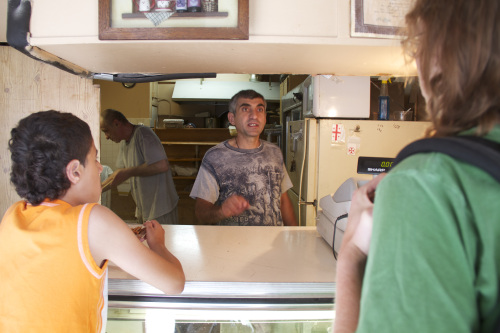 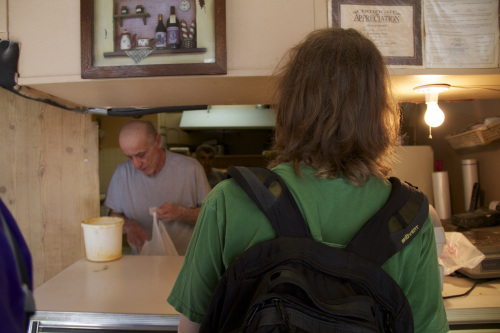 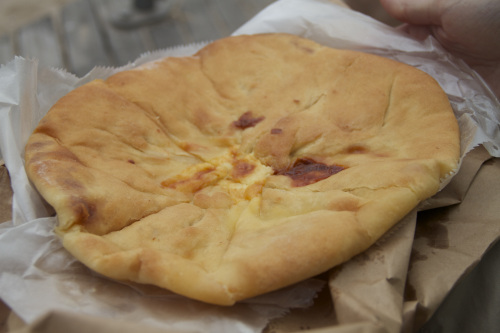 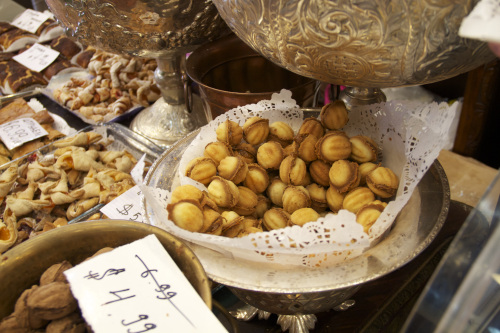 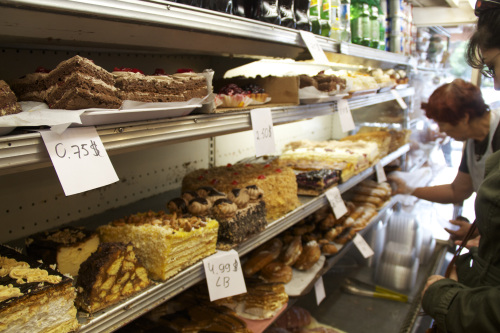 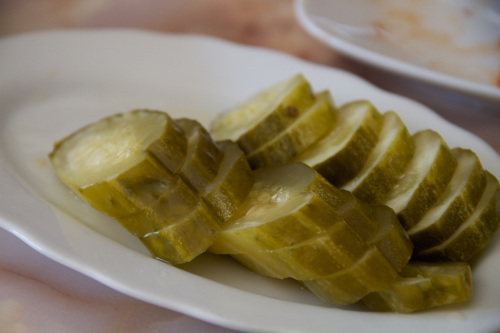 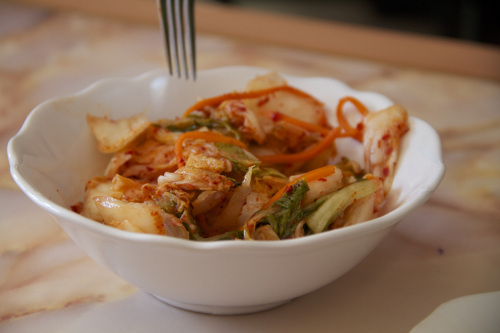 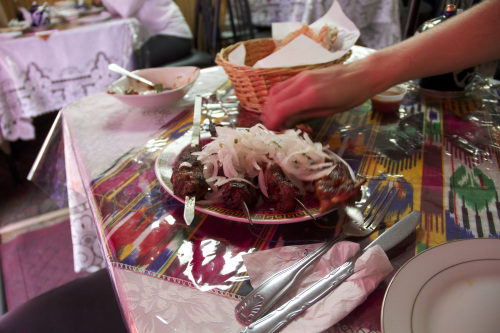 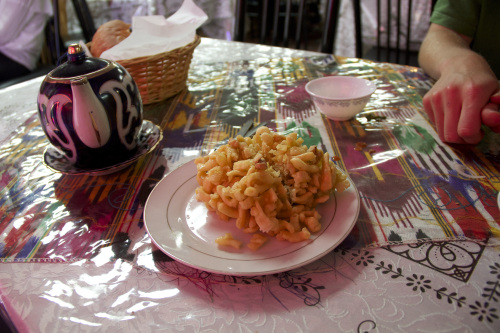 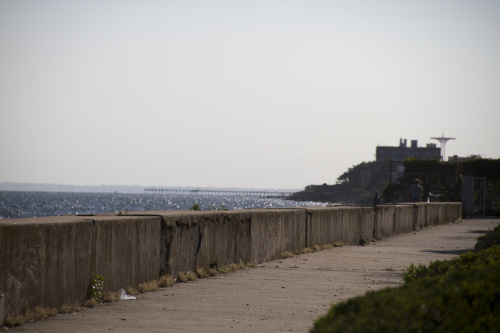