In Search of Lost Steakburgers

This summer, I took a class on “Reading and Writing Food” at Columbia. Over the next few weeks, I will post a sampling of essays composed for that class.

In Search of Lost Steakburgers

“I was twelve going on thirteen when I first saw a dead human being. It happened in 1960, a long time ago. . .although sometimes it doesn’t seem that long to me.” —Stephen King, “The Body”

When Dan the Manager got busted on a coke binge, the Steak ‘n Shake gang wasn’t surprised. We had all left St. Louis after high school; I was living in New York, Josh in Virginia, Jack in North Carolina. Over vacations we visited our adolescent haunt, sipping watery milkshakes and polishing off bowls of bright red chili. Yet, even a steakburger—topped with guacamole and chopped onions and pepperjack cheese—couldn’t bring back the Indian summer of our teenage years. First, our favorite waitress, Shannon, quit and went to college at Northeast Missouri State. Tani’qua got fired and works at Walmart. Sean disappeared, too—he once banged a Mexican gangster’s girlfriend and narrowly escaped drugland execution. Or so he said. But Dan was always around with a grin twitching under his pederastic mustache and a joke to lighten the burden of time unregained. END_OF_DOCUMENT_TOKEN_TO_BE_REPLACED

Stick to the Donuts, Dunkin’

I hate to admit it, but I love paradoxes. And chocolate. That’s why I decided to try the new Frozen Hot Chocolate ($3.27) from Dunkin’ Donuts on a recent summer day. “How is that even possible?” I asked myself incredulously. “I must be hallucinating because of the heat.” 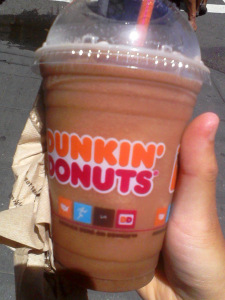 END_OF_DOCUMENT_TOKEN_TO_BE_REPLACED

Cheeburger Opens With a Rocky Start

When Cheeburger Cheeburger first opened a few weeks ago after a nearly 9 month delay, anxious students were clamoring to get their first sips of milkshakes and bites of burger. But in my own first experience, this crowd wasn’t the only thing causing chaos at Cheeburger, which seemed discombobulated, disorganized and disinterested in serving customers in a quick and efficient manner. END_OF_DOCUMENT_TOKEN_TO_BE_REPLACED

On Wednesday, Newark, Delaware got what it has been waiting for since October of this year- it’s own Chipotle. Long missed by New York, Maryland and New Jersey natives, the chain is more than the typical burrito joint. So I thought I’d take the time to give a bit of background on this Mexican hotspot in hopes of enlightening UD skeptics. END_OF_DOCUMENT_TOKEN_TO_BE_REPLACED