The Factory and the Futurist Vision of Cheese

When I think about futurist art, I think of a sub-chapter in the high school art history textbook, describing a few works most likely by Umberto Boccioni. The books always use “Unique Forms of Continuity in Space,” a bronze casting created by Boccioni in 1913, as their prime (and often only) example. Boccioni’s sculpture captures motion through space, speed personified in a cubism-influenced rendering of speed blur.

Largely Italian, this pre World War I art movement advocated progress at any cost, even violence . They claimed that a speeding car was as beautiful as any countryside, and art itself should reflect the new technological regime. This is the standard Art History 101 explanation of Futurism. Yet, the movement did not confine itself to just art. Futurist manifestos addressed many aspects of life, including food.

In fact, Filippo Marinetti’s 1930 “Manifesto of Futurist Cooking” argues that pasta should be abolished (pasta promotes pessimism) as should the knife and fork, food should be sculpted to please the eye, and music or poetry was to be forbidden except in specific intervals. Despite these ridiculous claims, some Futurist ideas about food have caught hold: each dish should only contain a few mouthfuls of food, the use of perfumes, vacuum cooking, and chemical indicators. The Futurist’s ideas have taken hold in what is known as “molecular gastronomy”.

Even outside hip cuisine, technology now plays a critical role in the food industry. A few days ago, I visited the Cabot Cheese Factory in Waterbury, VT.  I expected to find a factory… and I got one. Here, a giant mixer stirs the curds. 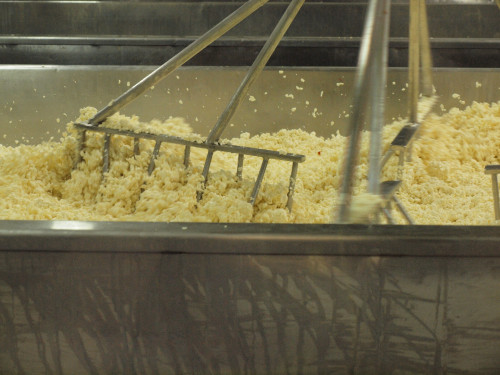 While I knew I was going to see an industrial factory, part of me still expected to see workers hand cutting blocks of curd, stirring vats, and boxing the finished products. To stay competitive with cheese giants, Cabot has had to automate, just as the Futurists predicted and hoped for. 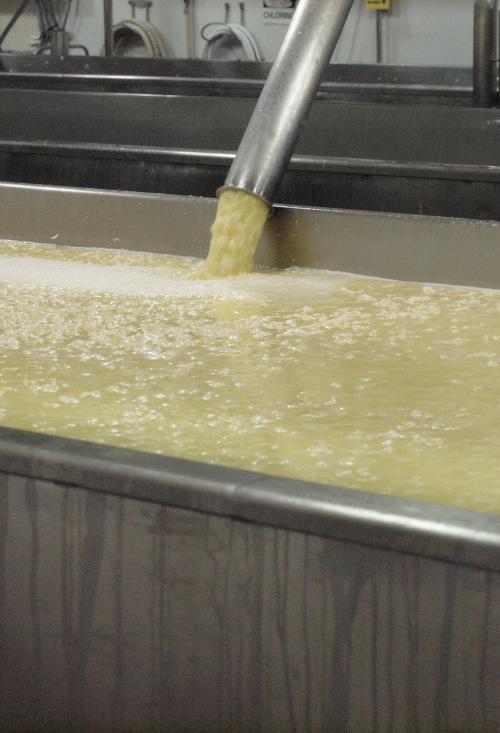 After the tour, there were abundant samples. I tried them all (after all, the best things in life are free) and felt rather ill afterwards. I enjoyed many of these samples, such as chili-lime cheddar and carmelized onion.  While I tasted, I did notice a discrepancy between the factory made extra- sharp, and the clothbound, cave aged cheddar. Both cheeses tasted excellent, tangy with a pliable texture. Even so, I could not help but notice that the clothbound cheese (with more human intervention in the process) had more complexity. It had a sharp, but sweet aftertaste, and crumbled easily in my mouth. The factory extra sharp, while tasty, did not have these qualities. Perhaps my unsophisticated palate simply played a trick on me, or I subconsciously wanted the clothbound cheddar to taste better, but the factory cheese tasted like, well, just cheese, impersonal cheese.

The futurists were correct, the future of food is in technology and fast paced production. On the other hand, I see the slow food movement, with locally grown and produced food items occupying a niche market. Which group is right in their food philosophy?  To me, the disparate philosophies are not mutually exclusive. Why can’t molecular gastronomy use “slow food” items and why can’t “slow food” gurus utilize science and efficiency standards? At least to my palate, there is room for both Cabot extra sharp and clothbound, cave aged cheddar.

— Through the lens of the Ocular Omnivore

A Report on Vermont, Its Food, Its PeopleIn "Dining Suggestions"

Tour de Hamdel: Chicken of the Sea Edition, or Who Invented the Tuna Melt?In "Columbia University"