Collecting the Restaurant: A Critique of “Foodie-ism”

Who knew that Baudrillard hated foodies?

More precisely, Jean Baudrillard, intellectual celebrity, dead Frenchman, and “radical thinker,” hated collectors. Finding that they “invariably have something impoverished and inhuman about them” (The System of Objects 114), Baudrillard launches an extensive critique of collecting based on his “system of objects” theory and a psychoanalytic grab bag. As I will argue that foodies engage in the active collecting of restaurants and dining experiences, by the transitive property of philosophy, foodies must have something impoverished and inhuman about them. Yes, I read Baudrillard for fun. On my vacations. What that indicates about my personal richness and humanity remains inconclusive.

For foodies, restaurants and dining experiences represent objects for collection. A visit to a prestigious or little known restaurant receives categorization and labeling. After meticulous recording and encoding, the experience joins other meals in private and public repositories. Obviously, the experience rests safely in the diner’s memory bank. Typically however, the foodie, as a participant in various Internet communities like Chowhound, Egullet, Yelp, and Mouthfuls, displays that experience for fellow collectors to comment on and observe. Describing in excruciating detail meals at restaurants like The French Laundry, the foodie gains status in a community of collectors. The accounts of these gastronomic tours de force function as tokens that provide vicarious pleasure to less lucky foodies.

Although I have successfully demonstrated that foodies collect restaurants in the most common senses of the word “collecting,” stopping with that venture would damage this criticism. In order to prove that the behavior of foodies presents an equivocal target for Baudrillard’s critique of collecting, I must prove that foodies constitute collectors within Baudrillard’s parameters.

First, Baudrillard claims that collectors collect objects or objet, “‘anything which is the cause or subject of a passion. . .’ no longer simply material bodies offering a certain resistance, they become mental precincts over which I hold sway, they become things of which I am the meaning, they become my property and my passion” (The System of Objects 91). Demonstrating that restaurant experiences can possibly become an individuals property seems impossible; yet, the uniqueness of a personal restaurant experience can be owned by an individual as only having been experienced by that person.

Second, for Baudrillard collecting involves the construction of a series. Foodies engage in this sort of behavior when, for example, they endeavor to visit all the Michelin-starred restaurants in a city. In my case, I visited The French Laundry nearly five years ago, largely due to Michael Ruhlman’s spectacular discourse on its merits in his book The Soul of a Chef. Soon, I will visit the other restaurant discussed at length in that book, Lola Bistro, completing my series. Ultimately, “there is something of the harem about collecting, for the whole attraction may be summed up as that of an intimate series (one term of which is at any given time the favourite) combined with a serial intimacy” (The System of Objects 94). Or foodies both enjoy the “singularity” of a given restaurant and its position in a greater sequence or project.

Perhaps Baudrillard’s most compelling analogy, wrist-watches, also provides the best analog to foodie-ism.  The general notion that “every object oscillates between a practical specificity, a function which is in a sense its manifest discourse, and absorption by a series or collection where it becomes one term in a latent, repetitive discourse—the most basic and tenacious of discourses” (The System of Objects 100) leads Baudrillard to compare the system of objects to the system of habits. Similarly, dining holds a hyperspecific practicality, the fulfillment of nourishment. Nourishment is the manifest discourse of eating. For foodies, a series of dining experiences absorbs the primal process of obtaining nourishment. In effect, the foodie collects a habit.

Interestingly, “habits imply discontinuity and repetition—not continuity, as common usage suggests. By breaking up time, our ‘habitual’ patterns dispel the anxiety-provoking aspect of the temporal continuum and of the absolute singularity of events” (The System of Objects 100), just as dining breaks up the temporal continuum of the day. We wake up and eat breakfast. The clock ticks down the minutes until lunch. How long until our afternoon snack? And then dinner. Maybe dessert. Our lives revolve around the manifest discourse of nutrition. At least mine does. Therein, eating is the purest object, because “objects do not merely help us to master the world by virtue of their integration into instrumental series, they also help us, by virtue of their integration into mental series, to master time, rendering it discontinuous and classifying it, after the fashion of habits, and subjecting it to the same associational constraints as those which govern the arrangement of things in space” (The System of Objects 101). The purest object for collection, dining, supersedes and transcends all other objects in this process of mastering time. Consequently, “foodie-ism” appears symptomatic of a deeply rooted, psychological need to master that which masters, to control and attribute status to a habit that simultaneously occupies the space of an object.

Baudrillard thus explains the desire to collect wrist-watches. The wrist-watch transforms “time into a substance that can be divided up. . .into an object to be consumed” (The System of Objects 101), allowing the collector to veritably possess time. Foodies participate in the same project as the watch collector, turning time into an object for consumption and then cataloguing that consumption for perpetuity. This process allows the foodie to obtain a certain immortality, “the possibility, from the present moment onwards, of continually experiencing the unfolding of his existence in a controlled, cyclical mode, symbolically transcending a real existence the irreversibility of whose progression he is powerless to affect” (The System of Objects 104). Time continuously progresses forwards and experiences evaporate. Collecting dining experiences in the form of text or even specially preserved memories permits a return to a past moment, an illusion of power over an unstoppable trajectory into death.

Baudrillard’s critique of collection seems most salient at the chapter’s conclusion where he observes that: “no matter how open a collection is, it will always harbour an irreducible element of non-relationship to the world. Because he feels alienated and abolished by a social discourse whose rules escape him the collector strives to reconstitute a discourse that is transparent to him, a discourse whose signifiers he controls and whose referent par excellence is himself. In this he is doomed to failure: he cannot see that he is simply transforming an open-ended objective discontinuity into a closed subjective one, where even the language he uses has lost any general validity. This kind of totalization by means of objects always bears the stamp of solitude. It fails to communicate with the outside, and communication is missing within it” (The System of Objects 114). While Baudrillard distinguishes between scientific and memory collections and object collections, critiquing merely the latter, I argue that “foodie-ism” functions as an object collection. Therefore, a number of criticisms of “foodie-ism” follow:

1. Foodie-ism operates in non-relation to the world. No matter how transparently connective foodie discourse appears, each foodie’s collection contains individualized experiences that the foodie may never actually transmit. Sharing these experiences in public forums, especially internet forums, still solipsistically envelops the collector in the self and engenders new divisions between self and the socius.

2. For the foodie, “normal” restaurant experiences occur in a social discourse whose rules escape him. The recreation of this social discourse in the almost jargony restaurant reviews on food forums and blogs allows the foodie to completely control the experience. If I want to ablate a moment from my experience, I only have to choose to eschew its description.

I, of course, am guilty of these transgressions in my own right. Nevertheless, I shall reevaluate my personal restaurant collection. Many foodies view non-collectors as “indeed ‘nothing but morons'” (The System of Objects 114), the people who just don’t care where or what they eat. Recently, making fun of The Cheesecake Factory, IHOP, and similar chain restaurants has captivated pseudo-celebrity bloggers and their already captive audiences. I would rather be a non-collector than such a collector, a non-foodie rather than a foodie. I refuse to sacrifice my humanity for the sake of my collection. Melodramatic? Yes. Important? Possibly.

Here’s the latest addition to my collection, Roast Duck Antipasto Salad at Alex and Ika Restaurant: 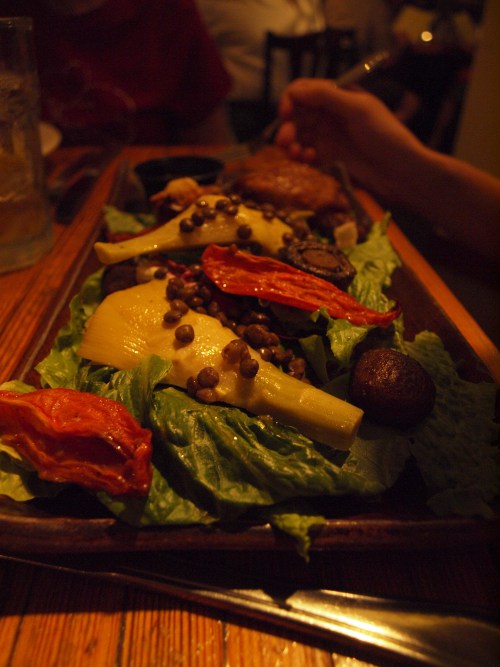 Imaginary and Real, the Restaurant and the Domestic: An Evening at New York Bite ClubIn "New York City"