A few days ago my Mom requested a chocolate pie for her birthday. I had only ever baked fruit pies before, so I felt apprehensive about making the filling, a pudding or custard. Since my Mom only has her birthday once a year, I decided to tackle this daunting task, and bake that chocolate pie. I found a recipe and made the crust first. The recipe called for a graham cracker crust, and following the recipe, the crust turned out swimmingly. I crushed the graham crackers, mixed in the dry ingredients and moistened the mixture with melted butter. I felt like a champion, especially after the crust issues with some of my fruit pies. 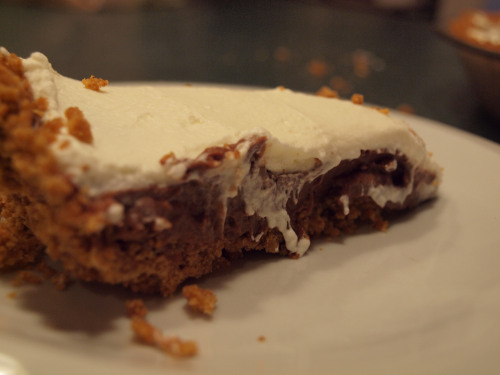 Next, I moved on to the filling while the crust baked in the oven for a few minutes. I feared this filling, with its milk and eggs. I would take berries, tapioca and sugar any day of the week over something that has to boil. Yet, I forged ahead, added the milk eggs, and cornstarch. Then I whisked in the vanilla, sugar, and salt. After seven minutes of whisking I began to grow nervous, the recipe said that the concoction should thicken noticeably at seven minutes. The pot hadn’t even boiled. I just kept whisking and hoped for a miracle. I accepted that whatever would be, would be, and this pie filling would fill that crust, no matter how lumpy.

Even as I lost hope in my custard making abilities, I felt resistance against my whisk. Miraculously, the custard had “thickened noticeably.” Gleefully, the butter went in next (every pie needs some butter) and then the chocolate. Pouring the filling into the crust, I found my lack of faith disturbing. After only an extra minute of whisking, I worried that I had killed my custard before it even had a chance to live. When I accepted what I had and went with the flow, the recipe worked. Baking to me is not an exact science, I bake in an organic sort of process. Perhaps I should have a little more faith in the magic of milk, eggs, cornstarch and lots of sugar. 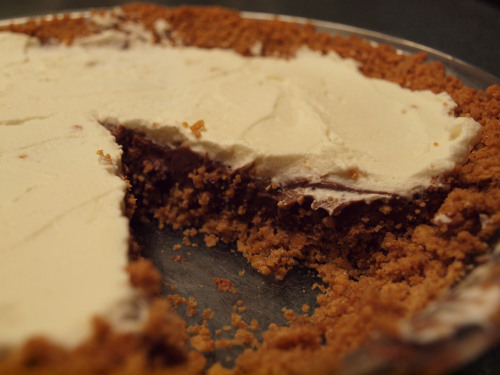 That’s whipped cream on the top.

— Through the lens of the Ocular Omnivore.

Filed under Miscellaneous, The Ocular Omnivore

3 responses to “Taking a Whisk”