Dining in a foreign country can be daunting for even the most adventurous eaters at home. It can be especially unsettling when the diner does not speak the language, happens to be eating alone, and this country happens to be France. I cannot judge definitively on the truth of the stereotypical rude French waiter; I encountered both the rude and the accommodating during my stay in Paris. Yet, at Ledoyen I found neither of these reactions, instead I was met with subtle bewilderment.

When I walked into the atrium of Ledoyen, I met a youngish man standing behind a desk, who asked me something in rapid French. I stared blankly back at him, trying to communicate using a mangled rendition of “je ne parle pas francais” (I don’t speak French). Whether he actually understood me or simply judged my abysmal French skills is unclear. In any case, he spoke reasonable English, and asked, “Can I help you?”

I explained that I had a reservation, and gave my name. He flipped through his book, scanning the names. I spelled out my last name. After a few inquiries about when I had made my reservation, he closed the book, looked at me quizzically, and spoke some incomprehensible French to another men standing behind him. Bracing myself to be thrown out of this opulent foyer where clearly a young American man had no place, I ran through a few possibilities. Perhaps they had lost my reservation, or maybe I had just dreamed about making one. Maybe my blue blazer and khakis violated their dress code and now they would take me by the scruff of the neck and throw me out onto the street!

Instead, the man led me upstairs to a table that could have seated four. Now I do not normally mind eating alone, but that moderately sized table seemed a vast expanse separating me from the waiters and the other diners. After a while the sommelier walked up and spoke to me in French once again. I shook my head and asked in English if he could make recommendations. He let out a small sigh, restraining himself nobly; it was the sigh of a man who wanted to roll his eyes but suddenly remembered his establishment’s three Michelin stars. He decided to just bring me something, mumbling the name, again in French. 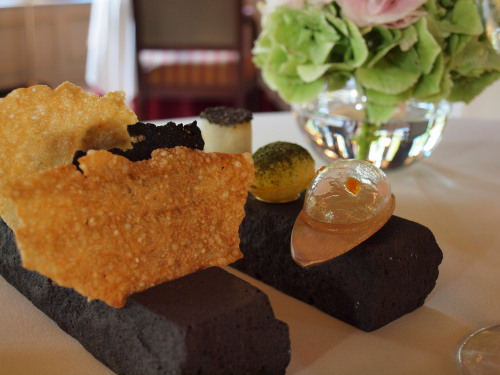 Once the food started coming I felt more in my element. The lunch prix fixe began with a watermelon gelee with cherry tomato that possessed delicate sweetness on a texturally rich bed of gelee, vegetable matter, and nuts. 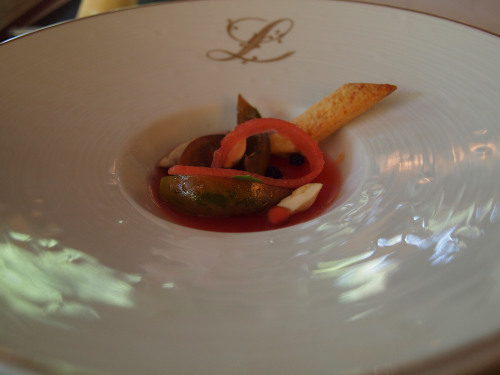 Next came gnocchi with chanterelle mushrooms and white truffle. These gnocchi burst in my mouth, truly the lightest gnocchi I have ever had. They actually floated, ethereally disappearing in moments while leaving the earthy taste of truffle behind. 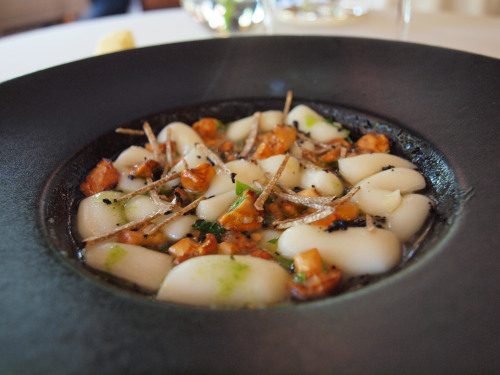 The main course was Gratin de Sole, with capers, lemon and clams. It paired well with the gnocchi, carrying through the lightness, but stayed true to the rich, buttery tradition of French cuisine. Despite the feathery sole, the clams stole the show. Sweet and salty combined with the tangy funk of the bivalve mollusk, pushing the clams to forefront of the dish. The clams claimed the soul of the “plat,” not the sole. 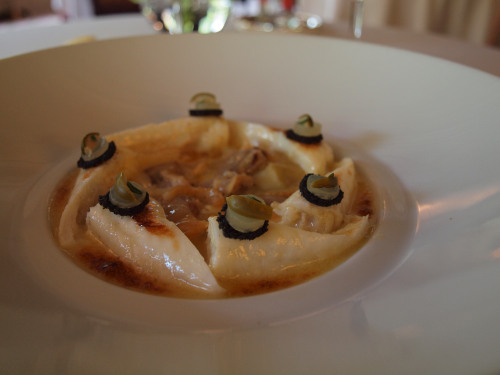 Last, I was served a pyramid dessert. Crème brulee at the base, covered in a strawberry compote, on which rested a coriander sorbet with a sheet of strawberry gelatin draped over the construction like a fine piece of cloth. The light spice of the coriander held its own against the richness of the caramelized crème brûlée. Unfortunately the gel sheet was a little too tough to cut through, so I ended up smushing the pyramid in the first attempt to cut through it. 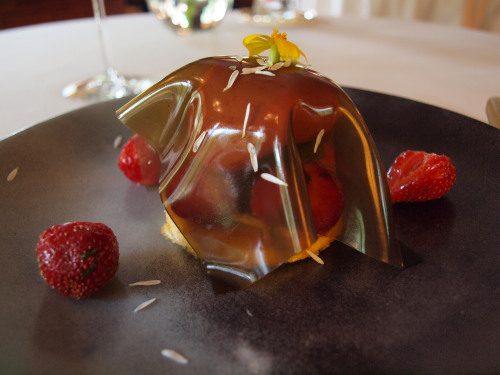 With coffee and salted caramels to end the meal, I rested comfortably. At the end of the meal, upon receiving the bill, the waiter asked if I would like to pay in euros or US dollars. I told him it did not matter to me and asked why. He replied with a barely perceptible smile that perhaps it would be more exotic for me to pay in euros. 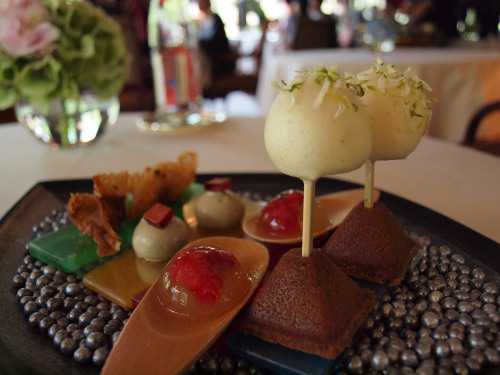 Throughout the meal I had noticed that the wait staff looked over to my table a little more often than normal with curious expressions on their faces, as if they were try to decipher the mystery of my presence in their restaurant. I only noticed this subtle anomaly occasionally during the meal due to the wonder of the food in front of me. Their curiosity was understandable, clearly the youngest patron by at least twenty years, and the only one in the dining room eating alone, they naturally wanted to study this oddity, without breaking the boundaries of politeness of course. As I reflected over my second cup of coffee, coming up to two hours for the meal, I intuited that under this air of curious confusion lay a faint attitude of disapproval. As if they were merely tolerating the presence of a young American dining alone who spoke no French. Asking for recommendations or explanations would merit polite, informative answers; nevertheless I sensed a brusqueness that went beyond the impeccable efficiency of Ledoyen.

Even unconsciously, the staff of Ledoyen had judged me as a curiosity, an outlier, an outsider to their world of international businessmen and high society Parisians. One does not go to Ledoyen in Paris to find down home southern hospitality. One goes to enter into another world, a world of refinement and generations of tradition. Yet, I found myself looking into that world through a veil, labeled a tourist, assumed unable to understand the experience.

I cannot judge Ledoyen for their judgment of me, as I cannot say a restaurant of similar caliber in the United States would do any differently. I can only reflect on and observe what I felt under the watchful eyes of those French culinary masters, and that is an experience, neither positive nor negative, in itself. Upon my visit to Ledoyen, I experienced amazing food that redefined my idea of what gnocchi could be. I also experienced three Michelin star service, which masked a curiosity flavored with bewilderment. That curiosity, in turn, shrouded a third layer of subtle judgment, not of my character or intelligence, but of my identity as a young American, a tourist, and an outsider. 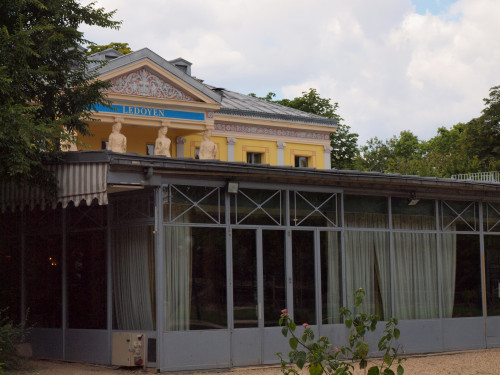 An Epiphany Per SeIn "Columbia University"

Parking the Only Downside to Parc RestaurantIn "Dining Suggestions"

One response to “Lunch at Ledoyen”