In France, La Fête Nationale commemorates the storming of the Bastille on 14 July 1789, a symbolic act of popular rebellion against the French monarchy. If you’re lucky enough to be in Paris on this date, you might get to see the Bastille Day Military parade along the Champs-Elysées.

For Francophiles around the world, however, le quatorze juillet presents a chance to revel in French culture, French history, and French food. Perhaps with a hint of irony, several friends and I booked a table at Brasserie Les Halles, the former home of celebrity chef Anthony Bourdain. The brasserie is named after the old market district of Paris. (The original market—know as le ventre de Paris, or “the belly of Paris”—was demolished in 1971 and replaced by the Forum Des Halles, a modernized underground shopping center.) Filled with Bastille Day balloons, the dimmed atmosphere of Les Halles offered a welcoming contrast to the extravagant Gansevoort Hotel across the street. When I heard music by Alizée—a French pop star known for her Lolita-like image—emanating from the inside of Les Halles, I was hooked. 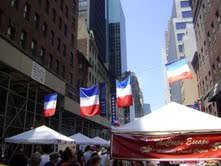 We began with an appetizer of terrine maison ($8.50), a pâté made of ground pork, beef, and liver. The mixture spread on pieces of bread like butter. Slightly salty, with a taste of onion, the terrine formed a large oval, like a facemask made of meat. Happy to oblige, I put it in my stomach instead.

After a bit of a wait (understandable in a French restaurant on Bastille Day), my order of Saumon Bordelaise ($22.50) swam to the table. What struck me immediately was the unpretentious simplicity of the dish; a substantial piece of grilled salmon brushed with red wine shallot sauce, along with a side of vegetables and potatoes. In an age where many restaurants try to compensate for poor ingredients by “modernizing” them into one big concoction, the salmon was a welcome repas. The dish passed my litmus test for good grilled salmon: not dry! The subtle sweetness of the red wine sauce kept the salmon moist without overpowering its natural flavor, brought out all the more by how skillfully it was grilled. The vegetables were unremarkable; in the dimmed light, I couldn’t tell exactly what they were, but they tasted like pickled cabbage. However, the lightly buttered potato medallions almost reminded me of my grandmother’s potatoes au gratin. 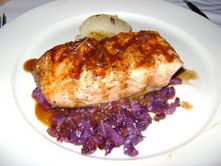 Finally, for dessert, I ordered the crème brûlée (how could you not like a dessert that gets blowtorched?) The rich custard base came in ramekin of considerable size, topped with a single blackberry and powdered sugar. Served cold, à mon goût, the soft vanilla cream (do my taste buds detect a hint of lemon zest?) complimented the sweet crunch of the caramel rather nicely.  A sweet finish to a delicious meal! 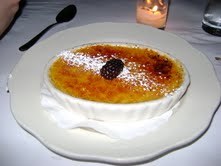 Apart from the food, Les Halles excels in creating an authentic brasserie experience, relaxed yet chic (and right on Park Avenue!). The crowd was definitely on the younger side, talking vivaciously to hear each other over the energetic music. Though the seating was tight, the service was solid, and the prices were budget-friendly.

If you can’t make it to France this summer (quelle dommage…), try Les Halles; the exquisite simplicity of the dishes and the waiters’ gracious “bon appetite” will be following you long after the meal is over.

Planet of the CrêpesIn "Andrew G."