Watermelon speaks of summer barbecues and the Fourth of July, the Stars and Stripes and the the Red White and Blue. Watermelon is the red stripe in the flag, yet, in a pie, the red fades to pink. Returning from New York, my brother requested a watermelon chiffon pie, from a recipe found in Ken Haedrich’s book “Pie” (this book comes highly recommended). Although I take pride in my willingness to try any food that comes my way, I was skeptical about including watermelon in a pie, considering that a watermelon obviously contains mostly water.

The recipe called for a graham cracker crust, filled with a mixture of whipped egg whites, whipped cream, and gelatinous watermelon juice, all blended together.  First, I made the graham cracker crust, crushing whole crackers with my fingers in lieu of readymade crumbs or a heavy mashing device. I find the irregular sized pieces from hand crumbling adds textural variety to the crust.

Next, I savagely hacked open a watermelon and chucked its flesh unceremoniously into a metal bowl. I mashed the fruit down with a wimpy plastic potato masher that I thought would snap right in half considering the unnecessarily powerful downward force I applied over and over again to juice the watermelon. Eventually I reduced the fruit to a bloody pulp and strained the juice into a saucepan. 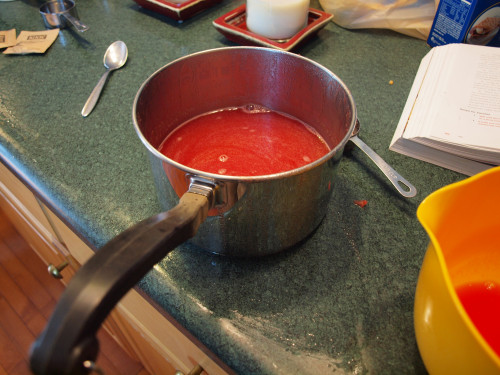 A series of annoying measurements ensued, including the requirement of two and three quarters cups of juice. Packets of gelatin emptied into one of the reserved quarter cups, then the steaming hot half cup, then the rest and into the fridge it went to gelatinize. I whipped the egg whites, then made some standard whipped cream and soon enough I had three bowls in front of me. 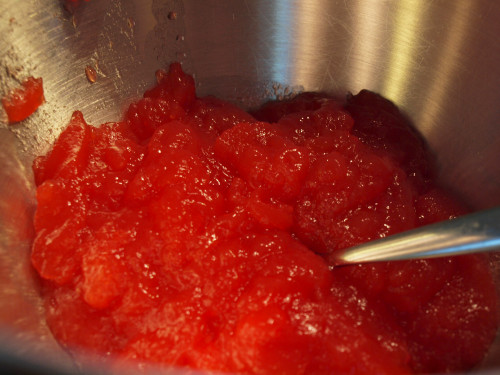 The recipe indicated that I should add a quarter of the whipped cream first, then the eggs, then the rest of the cream and stir to combine, but not too harshly, wouldn’t want to disturb its fragile equilibrium. I followed all of these steps, poured it into the waiting shell, and prayed that this pie would be edible after it came out of the fridge. 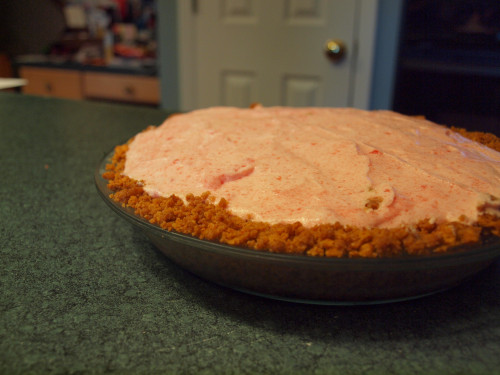 In fact, this chiffon pie garnered positive reactions, much to our surprise. It was light, not too terribly sweet, and held its shape well. I think the critical step regarding its consistency was the blending of the three components. Too little blending and the texture would have been uneven, whipped cream melting before the watermelon gelatin. Too much, or too vigorous stirring, and the structure created during whipping would break down, leading to a floppy, soggy filling. 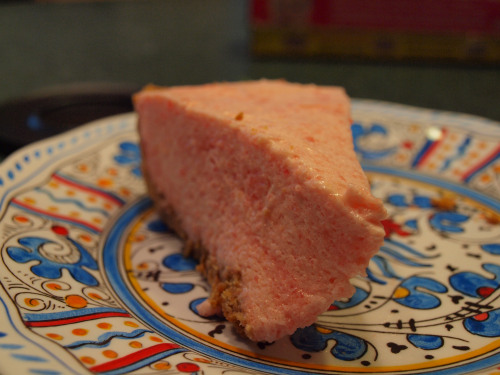 Although not quite as American as apple pie, watermelon chiffon pie takes an unlikely ingredient and transforms it into a summer dessert that can cool down even the hottest July evening.

Filed under Food, Pics or it Didn't Happen, pie, Recipes, Zach B.