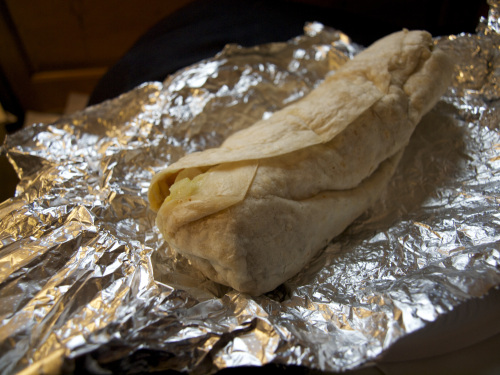 Perhaps some context would help explain my love for this burrito. I am training for a marathon, and had just returned from an eighteen mile run about thirty minutes prior to this picture. After showering and consuming an abnormally large quantity of water, I decided that this day called for a second lunch at 3:36 pm. I searched for the closest source of sustenance, a Mexican food cart that looked to be packing up. My desperate eyes could not convince him to make even one pork taco more that day.

Luckily, my old friend the Ay! Arepa cart stood on unsteady wheels just across the street. Praising all that is holy, I ordered a fish (tilapia) burrito. When I returned with my prize, I realized with a sinking feeling in my heart and my stomach that I had to photograph it for this article, delaying consumption for at least a few minutes. I can say without a doubt, that of all the photographs I have taken in my life, the above photograph was one of the most difficult to take. My body threw a tantrum, but mental will won out.

Finally, I could devour my meal. Guacamole, sour cream, salsa, lettuce, cheese, and grilled tilapia meshed together into a net of divine favor. Even now, my mouth waters just thinking of the impossibly light fish, wrapped in a blanket of avocado, fat, and sodium.

Objectively, that burrito was nothing special. I could get something similar from any cart or mexican joint in New Haven. Yet, in that moment, I could not judge objectively, I could only see the most delicious burrito ever crafted by human hands. Moreover, I would argue that in no moment can we judge food objectively. A foodstuff is neither inherently “good” nor “bad,” just by the fact of it existing in that form. Rather, food (and other aesthetic creations) engage in a relationship with its audience. In that momentary exchange, we judge something good or bad depending on how it makes us think or feel. In another situation, with circumstances changed, a tilapia burrito from the Ay! Arepa cart might be tasty, but not reach the heights of its past incarnation. For me in that moment, I ate the best burrito ever, and it will remain the best burrito… until I eat one after my twenty mile run next week.