To a cash-strapped student in the Northeast, making each dollar stretch as far as possible evolves from a budgeting strategy into a daily bargain-hunting experience. In Boston, Cappy’s Pizza’s and Subs near the Back Bay Fens serves a competitive bargain to all students looking for a filling meal at a low price. With single slices of pizza larger than the size of one’s face, Cappy’s, as locals call it, definitely delivers the illusion of value, regardless of one’s lunch budget. 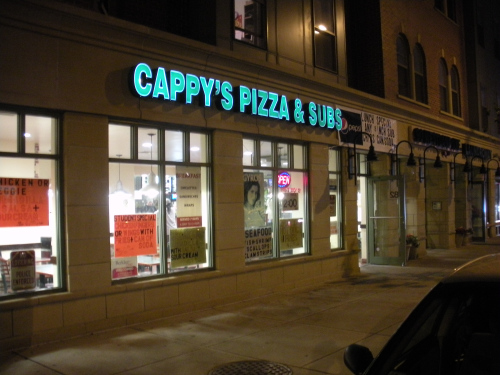 The menu consists of most standard pizza toppings, and while the slices aren’t loaded to the brim, the sausage, pepperoni, and mushroom are heartily sliced and of larger than average size. In typical thin-crust fashion, each slice is coated in a shiny layer of grease, hot out of the oven. The first couple of bites are the trickiest, with most people unsure of how to begin a 12”-long slice that droops off the edge of a paper plate in three places. Before folding the entire slice with both hands and diving in, first-timers will find the initial nibbles at the corner quite unsatisfying. At this point, the cheese, toppings, and grease all congealed together resemble something more of a calzone, and self-control must be exhibited to save a generous portion of cheese to accompany the crust—otherwise a dry, brittle end awaits after the gooey mess is defeated. (Maybe that’s where the overpriced cans of soda come in handy.) A single slice of this cheesy monstrosity doesn’t exceed three dollars, and while one slice is probably enough to satisfy even the hungriest college male, sometimes picking up two slices for five dollars seems like a better decision. 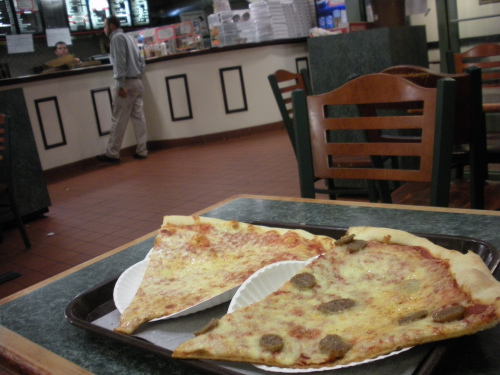 Since Cappy’s pre-cooks its most popular pizzas, the turnaround time for each customer rarely exceeds two or three minutes. During a typical weekday lunchtime bustle, the line crowds up to the door of the pizzeria, but never stands still. Each worker behind the high counter shovels slices of pizza into the giant oven as quickly as orders are shouted, returning to the register to yell, with unconcealed impatience, “Who’s next?” Open late, Cappy’s is equally as satisfying for those early-AM munchies, though expect a more unruly crowd of belligerent frat boys as the night progresses. For some, the pain of finishing just one whole slice would be enough to swear off Cappy’s for the semester. With time, however, the allure of a cheap meal, or perhaps the challenge of having the largest slice of pizza in Boston handed over the counter, wins over the conscience of any hungry student.

A Soup of Superiority: Le's in BostonIn "Boston"

Not Just Another Orange ChickenIn "Boston"

Adventures of the Kitchen Warrior: Part 1In "Boston"