Sketches of Alsace: The Bar Room at The Modern

When my brother came to New York to see an exhibition of 20th century drawings, he met met me for lunch. The Bar Room at The Modern seemed like the logical choice: attached to his destination (MoMA), reliable, and without the more formal Dining Room’s dress code. Settling down for an hour lunch, we took a quick tour through Alsace, or more properly, chef Gabriel Kreuther’s imagining of Alsace. What a pleasant daydream, too, a meandering voyage into the boundary between France and Germany. [Pictures after the jump.]

Full within minutes of throwing open its doors, the Bar Room necessitates reservations and an open mind to navigate its unwieldy menu. Initially, the division into three categories (labeled One, Two, and Three) seems intuitively logical. The dishes must progress in heaviness and portion size, right? No, the categories serve mainly to distinguish between courses Americans consider more “appetizer” than “entree”—for instance, a plate of “Modern Liverwurst” with four pickled vegetables falls under the “One” heading, because a spreadable meat served on toasted bread must precede composed plates. 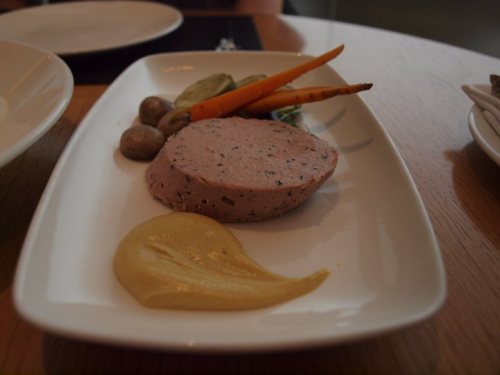 With a dab of searing hot mustard and a tart mushroom cap, this liverwurst refracts rusticity through a refined lens. This optical distortion of German, French, and Alsatian classics characterizes all of Kreuther’s creations.

Just as the liverwurst arrived, horseradish-crusted Scottish salmon with cabbage and Reisling came to the table. The lunch’s weakest dish, the salmon drowned in a bubble bath of puerile foam. Although the salmon, cooked to a glistening medium-rare, tasted bright and hot under horseradish house lights, the bland, inexpressive foam detracted from the composition. 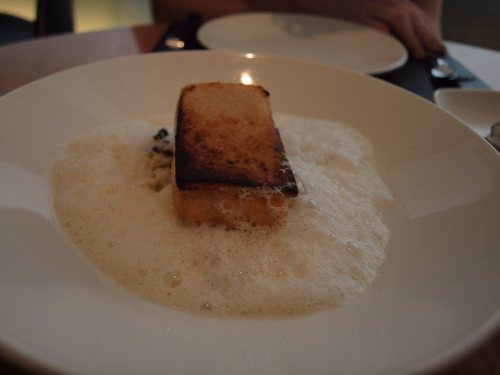 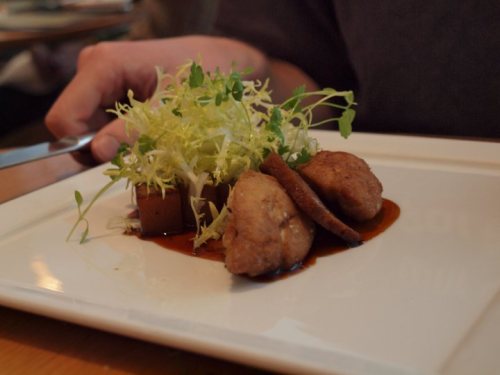 Finally, a more substantial allotment of beer-braised pork belly concluded the meal. An inventive rutabaga choucroute brings needed acidity to the fatty belly, but the pristine, crispy skin elevates this dish above its more mundane competitors across the city. Ginger provides a kicking heat, emphasizing the rutabaga’s winter sweetness. 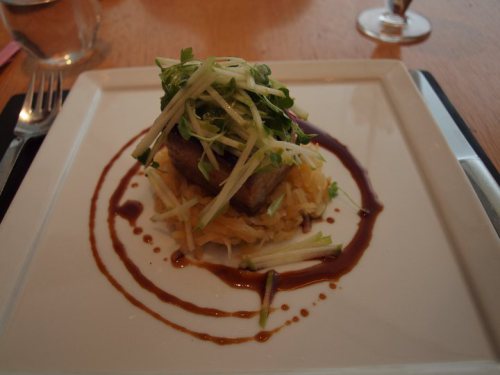 During this brief lunch, the food sketched a contemporary portrait of Alsace. A natural site of hybridity (what now passes for “fusion cuisine”) Alsace synthesizes competing European food traditions into a cogent whole. On previous trips to the Bar Room, other dishes confirmed this assessment: the tarte flambée, an Alsatian thin crust tart like a pizza; wild mushroom soup with spectacularly salty chorizo ravioli; fresh grilled shrimp with green cabbage and gruyere salad; duck confit a l’orange with Brussels sprouts and fingerling potatoes. Gabriel Kreuther is one of New York’s most talented chefs; his impressively coherent vision demands respect.

From Aldea to Laut: Making Sense of the Michelin SpectrumIn "New York City"

Tagged as Alsace, Food, New York City, The Bar Room at The Modern