Savory food isn’t really my thing. When it come to meals, I’m pretty much exclusively the dessert chef/procurer. Yet, in my exploration of pie it was inevitable that I would one day have to face the meat pie. Meat pies have a long history, tracing back millenia, with many theories about its various uses. Scholars believe that medieval meat pies were more like casseroles, with a much thicker pastry acting as the cooking container and preserving mechanism. From the Greeks to the Romans to the Middle Ages, the pastry was not meant to be eaten. Over time, the crust grew lighter and flakier until today when the historically “inedible” crust separates a pot pie from a meat stew. 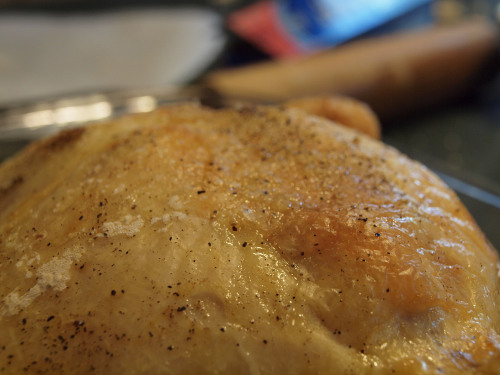 Essentially, the filling for a pot pie consists of meat, vegetables, some sort of stock, cream/milk, and flour. I roasted the chicken for an hour in a 375 oven beforehand until it was tender but definitely not well done. The meat will cook more in the skillet and in the pie. Cook the vegetables and meat in a skillet with a generous amount of butter. Then add a small amount of flour and mix it well. Pour in the stock and cream and let it boil slowly until the mixture begins to thicken. The amount of each ingredient really depends on the desired texture. For more gravy, have a higher liquid to solid ratio and vice versa for a chunkier, more solid pie. For thicker gravy, add more flour. I used 3 1/2 cups of solid to 1/4 cup of flour to 3 cups of liquid. Since my ratio was almost 1:1, the pie was more of a casserole with crust in it, and the gravy was fairly loose, but not runny. 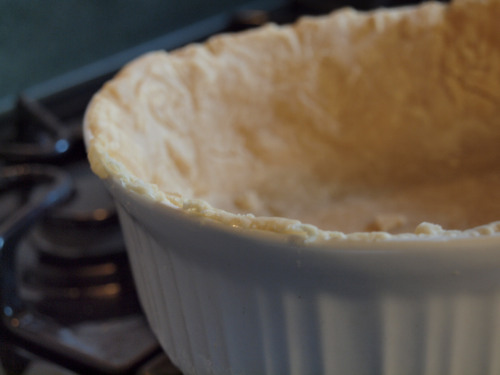 I used the all-purpose half butter half shortening, 3:1 flour to fat pie crust for this. I made barely enough crust to cover the bottom, sides and top of the casserole dish with a double crust recipe. That problem led to several repair spots. Generally, I would make a little extra dough than you think you’ll need. Better to have too much than to have a giant crust hole in the bottom. Of course, some people choose not to do a bottom crust at all. I prefer lots of crust, because that’s the best part of the pie in my humble opinion. 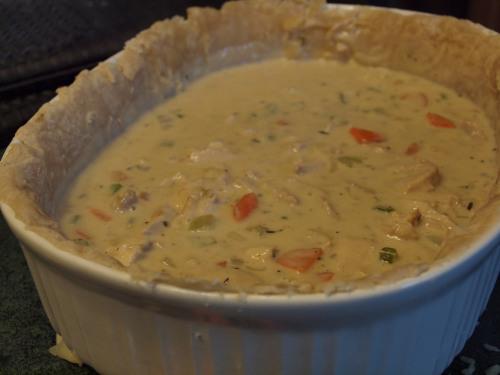 Also, I partially pre-baked the crust before filling it to ensure that it would be crispy on the bottom. Then, just bake until the pie is done, when the filling starts bubbling up out of the steam vents and the top crust browns nicely. I just scooped it out of the dish with a spoon. But if it had been more solid, I would use a spatula.

In short, the pot pie is a highly variable, flexible, and relatively easy meal for large groups. With some variation, the pie can take on characteristics of a casserole, a stew, or even a loaf-like solid, bound together with gravy. 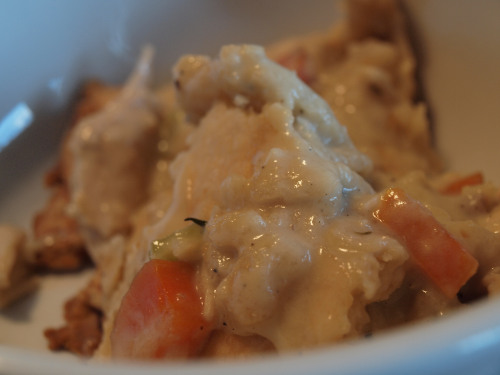 6 responses to “Pics or it Didn’t Happen: Chicken Pot Pie”