Have you ever handled a leg—felt the femur’s heft, massaged its sagging muscles, pushed a gentle, probing finger into its ligamental hosiery? Nothing tastes like fresh—really fresh, freshly killed—leg, preferably eaten in December with holiday trimmings. In this Jewish house, St. Nick came in August. Last Tuesday, I dismantled my Christmas lamp with a hacksaw—sliced that leg above the knee and tore the knobbly head off the iliofemoral ligament. After wiping down the attic dust and spending a suitable time admiring its injection-molded geometry, I rubbed on brown sugar, salt, mustard, and black pepper. It rested in the refrigerator while I played “In Your Own Sweet Way,” missing more than a few notes. Ever since I broke my wrist and three fingers, my left hand hasn’t worked properly. I know the score and, with a mighty will, urge the numb thumb to slip under that tedious middle finger. Despite my constant efforts, I always stumble through the colonies of notes swarming around the bass stave. Such huge chords frustrate average hands, let alone my deformed left. While my Christmas leg marinated and developed a double deckle crust, I flopped my hands against the score, and then, when I felt suitably tired from the pointless effort, built a hickory fire in the smoker.

I decided to bring down my Christmas lamp from the attic and cook it, because my wife finally died and I saw no reason to maintain an unhealthy attachment. She gave it to me for our first anniversary. Although I grew up excessively Jewish, we decided to raise the kids—since in these relationships, some unknown quantity of “kids” invariably dwells just over next year’s horizon line—atheist. During the holidays, we would celebrate Christmas, the most atheistic option. At the time—we were both in our late twenties and ready to buy this home (and its half-acre backyard)—we gave up our once fervid revolutionary aspirations and consigned those Marxist sentiments to momentary ironies and behind-the-back sniggers. By celebrating Christmas, we could give our “kids” a normal holiday season and still gift the corporate warlords with an ironic middle finger salute. For the anniversary of our first Christmas, she gave me a studio replica of the leg lamp. You know, the fishnetted woman’s leg fashioned into a light fixture that Ralphie’s dad treasures in A Christmas Story. I loved A Christmas Story and fantasized about Ralphie’s life after Christmas. When my wife left, I put the lamp in the attic and didn’t look at it until she died.

Once the charcoal briquettes collapsed into white hot sediment, I took the woman’s leg and put it on the grill, fat side up. No audible sizzling, since the wet hickory chips cooled down the fire. I brushed on my mop sauce—olive oil, red wine vinegar, salt, black pepper, paprika—and shut the lid. 225 degrees. Barely hotter than my nuclear sauna sessions, barely hot enough to char plastic. I pushed the chimney top open for more ventilation and returned to the kitchen.

Although I eat dinner alone most nights, I called my neighbor, Nanette. A jogger knocked her down in the park and she broke her femur. I checked in with her every day to make sure she had reached the bathroom and wiped herself appropriately. “Hello Nanette, I’m cooking a whole leg of lamb and it’s too big to eat myself. It weighs seven pounds, five pounds of meat counting the bone, and it could feed the whole neighborhood. Why don’t you come over and help me finish it?”

All wrapped up in plastic, a leg of lamb looks de-anatomized. It is a length of flesh held captive in polyethylene stockings. Peel back the packaging, however, and the thigh spills out, grateful to escape its corseting. A sizable pad of fat cushions the leg and gives the cook a grip, someplace to dig the nails while swinging a grand battement en cloche. Before marinating my leg, I puppeted it around the kitchen, dancing a great ballet with swinging strokes. First position, fourth position! And one and two! And into the refrigerator in a clay casserole dish.

My Christmas lamp leg cooked for four hours. I turned it every forty minutes and basted it with mop sauce. Towards the end of the grill session, I flipped the entire leg so that the fat rested down and rendered. Instead of serving it with barbecue sauce, which I eat by the spoonful in the late afternoon, I wanted to make a salad, something healthful to go with the fat and plastic. The grocery store sells prepackaged mixes of organic greens. Inside the lid, a little message jumps out like a jack-in-the-box. “When you eat organic, you make the Earth a better place for kids like me. Nancy, grade three.” A surprisingly political and precocious message from a young girl. I wanted to eat more salad because then I could make the Earth a better place for kids like Nancy. I peeled two pound of muscato grapes, roasted and salted a pound of walnuts, and crumbled a wheel of Maytag blue cheese. Fred Maytag II invented his namesake blue in 1941. In exchange for Iowa State University’s new cheese making technique—Roquefort from cow’s milk, not sheep, not sheep, a crucial distinction—Fred paid royalties. As supermarkets rush to stock mounds of foil-wrapped Maytag wedges, those royalties seem like smart trade.

Nanette arrived at seven, by which time I had removed the smoldering cinder of leg from the grill and allowed it to rest. Beneath its fatty skin, embalming fluid coagulated and esters polymerized.

“I’m sorry to hear about your ex-wife,” Nanette said, peering at the leg over her circular black spectacles. Her mouth tightened at its corners. My mouth salivated.

“I would honestly prefer to forget about it.” I cut into the leg with a serrated knife. Swathes of gray and pink flesh peeled off the bone. I buried my left hand to the Christmas leg’s heart and tugged at the femur; it slipped out like an abscessed tooth. Buried to the gum, it had rotted in greasy musk. I liberated it from the tissue and held it to my eye. Nanette sat at the table and waited with her gray hair pulled back as I delivered two pounds of plastic to her melamine plate. We ate the leg together and commiserated over how terribly inconsiderate Dave Brubeck was to write a piece of music requiring three extra fingers. For dessert, we ate lemon meringue pie. The next day, I buried the bone in the backyard by the smoker, where it eventually grew into a lemon tree that bore fruits with teeth instead of seeds. 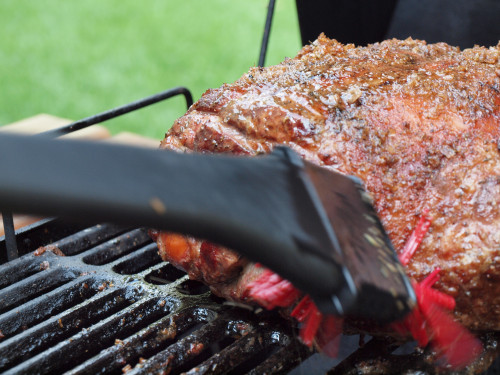 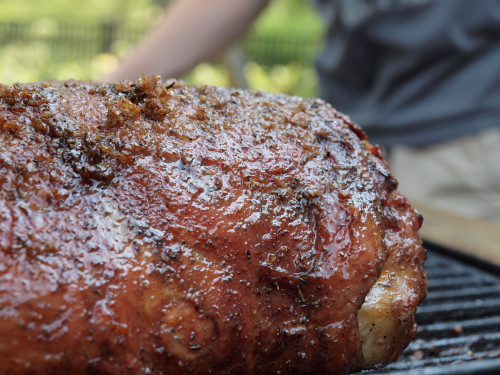 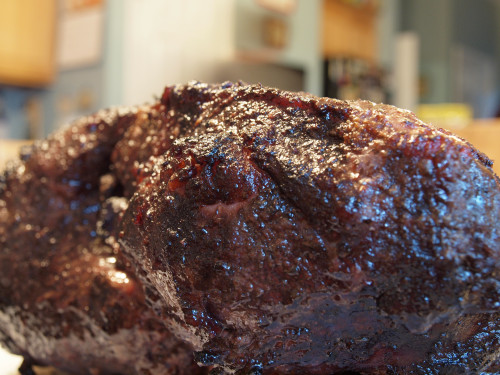 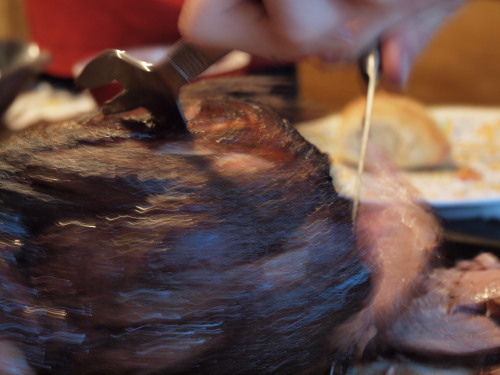 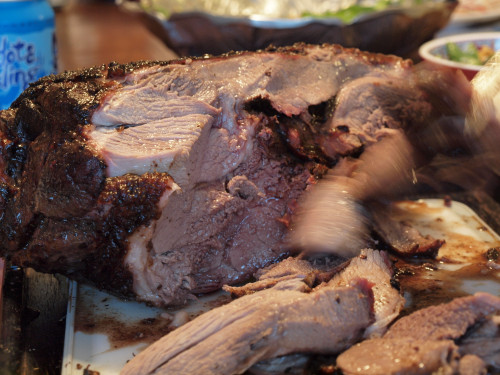