A staple of American dessert culture is the lemon meringue pie. Although lemon flavored desserts and custards have been in use since medieval times, the lemon meringue pie as we know it did not emerge until the nineteenth century. For my lemon pie, I used a recipe that originated a bit more recently. My recipe came from my great-grandmother’s cookbook, dating from the early to mid- twentieth century. Although I only have vague memories of her, and none of her lemon pie, I hear stories of her baking virtuosity. So I decided to test out her recipe and see if I inherited some of her baking genes. 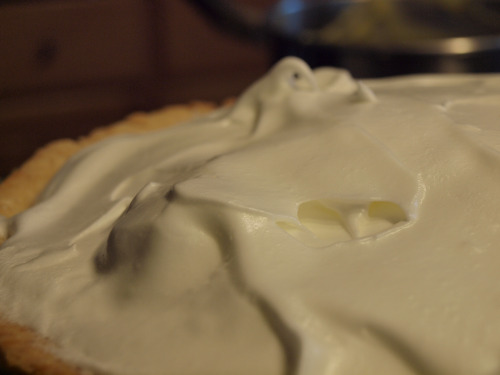 First, I made my usual half and half crust and fully pre-baked it. Then, the custard uses a cup of sugar, a teaspoon of salt, two tablespoons of flour, and three tablespoons of cornstarch. Once mixed, add a cup of water and 3 egg yolks. Mix that all together.

Then boil one and a half cups of water and add the egg mixture, along with the juice of one lemon (I used between three tablespoons and a quarter of a cup). Stir it constantly until it thickens and boils slowly. Then take it off the heat and pour it into the shell. That’s a pretty standard custard recipe.

Now make the meringue. Three egg whites, six tablespoons of sugar, a pinch of salt, one teaspoon of lemon juice, and one half of a teaspoon of cream of tartar. The lemon juice and cream of tartar stabilize the meringue due to their acidic properties. Beat until you get stiff peaks. That doesn’t mean kind of droopy a little bit, that means stiff peaks. 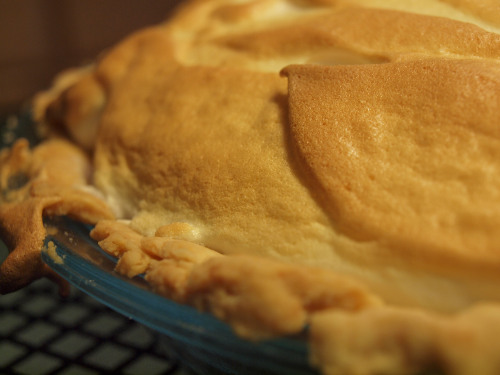 Then, spread the meringue over to top and bake for ten minutes at 375 to brown the meringue. The only problem with my version was that I didn’t beat the egg whites enough, so the meringue didn’t get as fluffy as I would like in the oven (the meringue expands in the oven because the air inside the bubbles expands when heated). 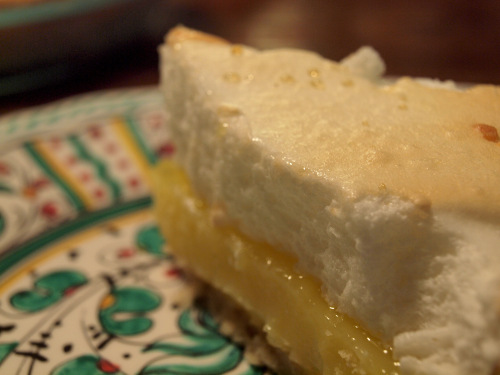 Baseball cards, art, and antique furniture all appreciate in monetary value over time. Even though I can’t quantify the value of my great-grandmother’s recipe, using it I feel a connection with my family’s history. That kind of personal meaning can’t be bought or sold. Hopefully, my great-grandmother would approve.

7 responses to “Pics or it Didn’t Happen: Lemon Meringue Pie”