Princeton classes may have started, but my first article of the year comes to you from Jersey City, on the less popular end of the Holland Tunnel. Usually I limit my articles to the Princeton area, as they seem more pertinent to the student body, but besides the new Qdoba, there’s not much in the way of Latin cuisine near campus, and Jersey City is still within a reasonable driving distance of the campus. But most importantly, my family and I are on a neverending quest to find the best Cuban food in the country (outside of my mother’s), so when we heard about Azúcar, there was really no question about our dinner destination.

My family and I walked into the restaurant at 4:30, and not surprisingly, there wasn’t too much of a crowd. We were seated immediately (unusual for a family of six), ordered our drinks, and faced with a huge menu, asked the waitress what she would recommend for appetizers. Because we were such a big party, she recommended the Tipicos Antojos Cubanos, a three-tiered tower of croquettes, fried pork chunks, yucca fries, bacon-wrapped shrimp, and several other tidbits. The pork chunks were especially good, with a crispy, smoky exterior that gave way to a moist, juicy center with an uncannily good taste.

For dinner I ordered the Ropa Vieja, a traditional Cuban stew of tomatoes, shredded beef, and other vegetables and spices. The name translates to “old clothes,” and supposedly refers to how stewed, shredded beef looks like old, tattered clothes. It tastes markedly better, however, as the beef was flavorful but not overpoweringly spicy, and the base of the stew was satisfying without being too filling.

My friends know that there are two desserts I will order without fail if available on the menu: bananas foster and flan. So it would come as no surprise to them that I ordered and thoroughly enjoyed the latter. It was creamy and dense, but was a bit thicker than I’m used to and more filling than I generally prefer, so while it was very tasty, I’ll be sticking to my mother’s flan for the time being.

Overall the meal was great, and while it was a tad expensive, it was worth every penny. The experience was unique and exciting, even if the atmosphere was suspiciously club-like for 4:30 in the afternoon. Perhaps my favorite piece of decoration was on the area above the bar, which had a Cuban flag draped over it and a sign that said, “Come y bebe que la vida es breve,” which translates to “eat and drink, for life is short.” So even though I dropped more than I’m used to spending on food, I figured “why not? I’ll have stories to tell, articles to write, and good food in my stomach.” And with that I’ll conclude what I hope to be the first of many articles of the year. “Come y bebe, que la vida es breve.” 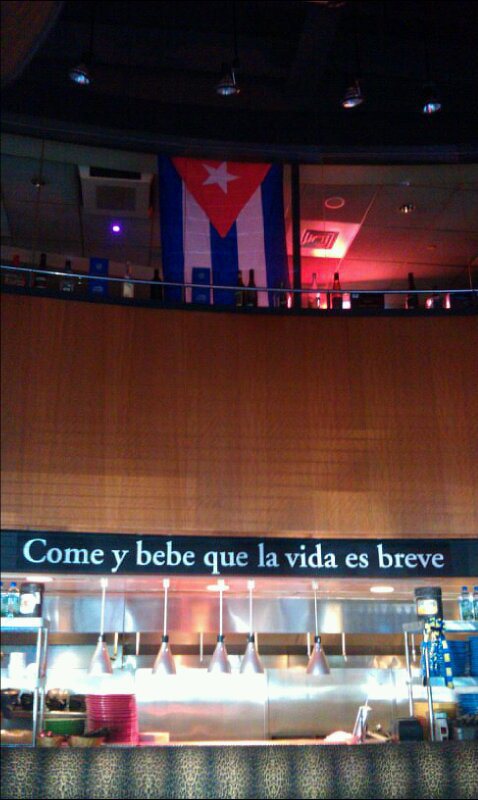 Up in Princeton's GrillIn "Marc P."

One response to “Azúcar: Great Cuban Cuisine in Jersey City”