“The photographs are not illustrative. They, and the text, are co-equal, mutually independent, and fully collaborative.” James Agee, Let Us Now Praise Famous Men, xi. 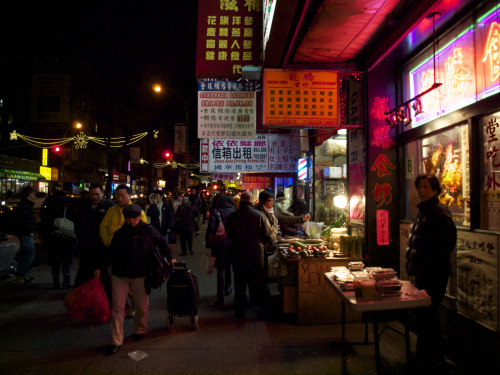 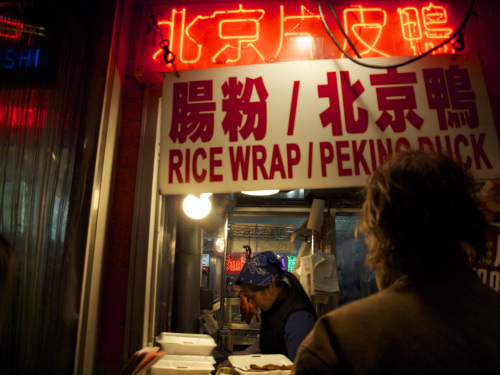 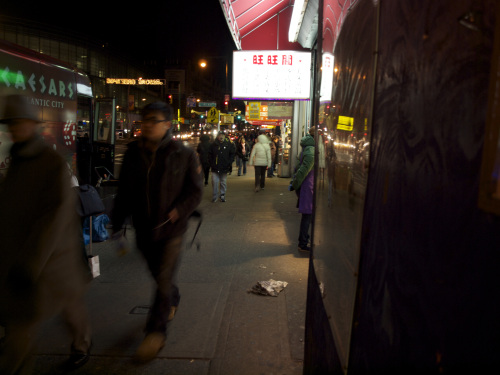 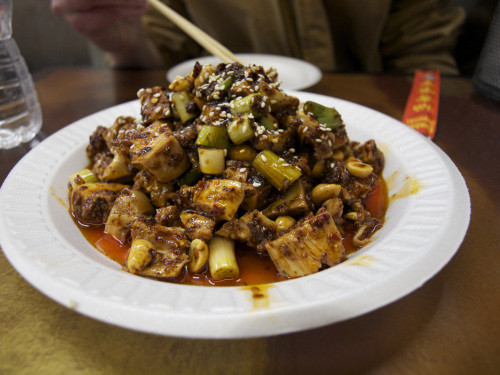 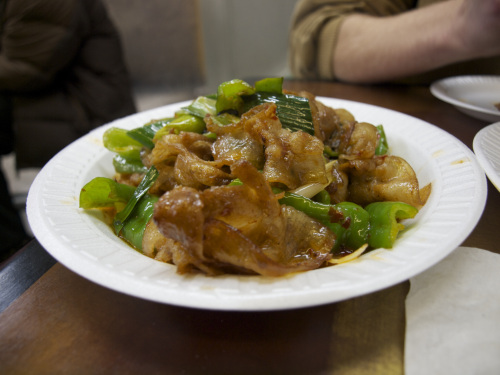 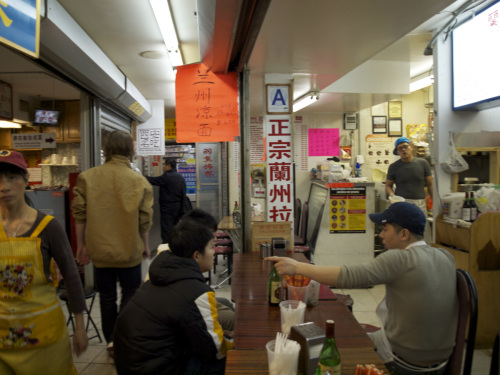 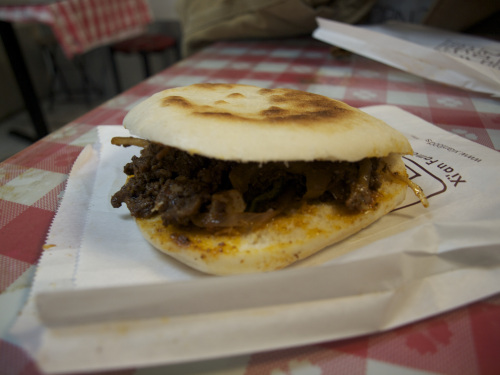 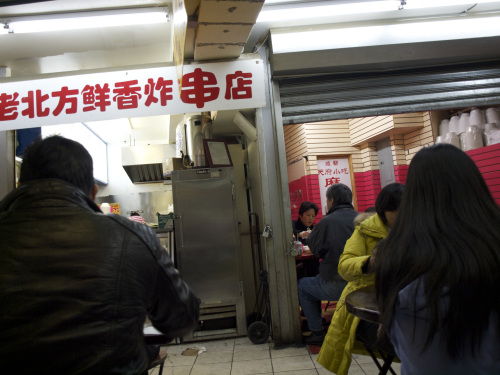 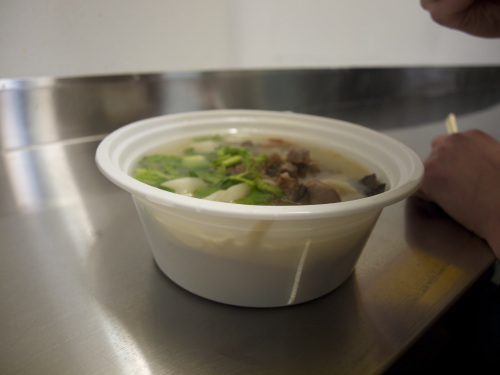 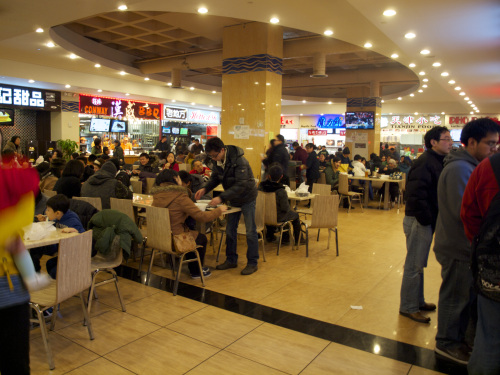 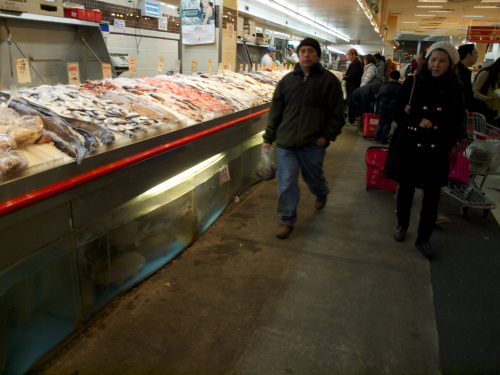 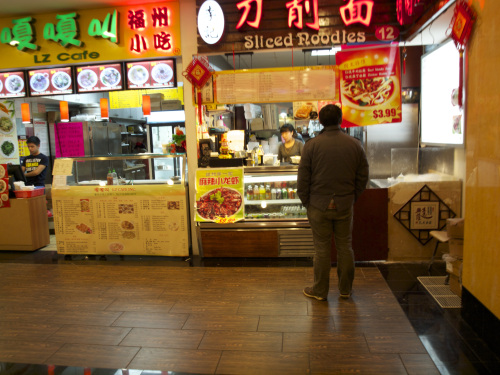 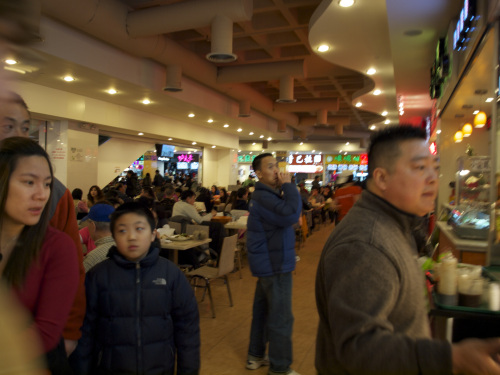 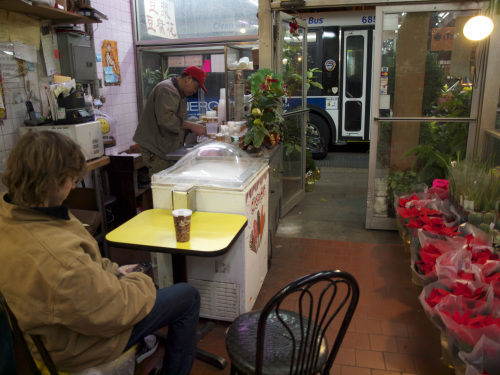 Mark Ladner, chef at Del Posto, wears square granny glasses and blue latex gloves. With a practiced snap to check for fit, Ladner bends over the cutting board.

Pig: Sus scrofa domesticus: child-like. Its hairy and pink skin reflexes upon palpitation; it snuffles to the human touch. Cradled in the arms of a pubescent girl, its heart beats in languid, muffled, contented ka-thumps. It avoids cold, wet, and windy weather, preferring the safe habitations of a straw-lined litter. In the bluster of a kitchen, the pig peeks its pointed head between open oven doors, inquires into burbling pots, and trips, nervous, as though made uncomfortable by the warm voices far overhead. They speak of dinner and death.

The butcher’s block is an obligatory feature of the modern kitchen. Along with the refrigerator, the dishwasher, and the automated washer/dryer, the butcher’s block claims a position of prime importance on the countertop. Where else would a housewife (complete with head-scarf, false nails, and veneered teeth) chase down chickens and chop off their heads? Butchering is a natural technology of ordinary living.

To kill a piglet, hogtie it. Duct tape, painter’s tape, clothesline, superglue, candle wax, and plastic tubing are convenient household adhesives suitable for keeping your piglet secure. Before proceeding, it is considered polite to blinker your dinner, either with a blindfold or a sharp pair of scissors. Expect screaming: that is normal. Unless he uses the designated safeword, hoist him to the butcher’s block. You should sanitize the block with baking soda, lemon, vinegar, or bleach. Surgical instruments should be sterilized, preferably in an autoclave. Hold the piglet’s body down and tie its mouth shut. As opposed to a full-grown pig, which will fight violently, the piglet will flop against your hand in soft, flaccid strokes. Eventually, the piglet will exhaust itself. Wash it. Tenderly bob its trotters in soapy water. Dry it with terrycloth. Stab the piglet through the heart and cut its jugular vein. Hold his head while he dies.

[I first dissected a fetal pig when I was eleven. It came in a plastic bag, swimming in formaldehyde and prenatal juices. There is a universal boyhood fascination with the underneath, with peeling back the skin to see ‘how it works.’ My subjects included old television sets, a desktop computer, frogs, fish, and radios. While friends enjoyed assembling model cars and building bikes, I could never resist the impulse to deconstruct. Armed with screwdrivers, hammers, hydrochloric acid, and the occasional improvised explosive, I broke down machines into their queer components. I admired their internal geometries: their strange organs: stroked a young finger across their greasy black innards: and buried them in a basement chemistry lab. I think my childhood acquaintances are still disappointed to discover that, contrary to their expectations, I did not grow up to be a mad scientist.]

Chef Ladner has a pile of pig-parts spread out at his station. Tiny belly (once perfect for the poking—giggle giggle), petite rib chops, back, shoulder, and skulls, all scalded to remove bristles. Instead of expediting, he’s handling the piglet. It deserves the kitchen’s gentlest hands. An order comes up for two piglets, and he sets to work. He is a tall, thin man, fitter for carnival barking or stilt-walking than fine Italian cookery. Behind those black frames, his eyes glisten. Moist mouth open and tasting the air, he starts, movements short and quick and full of love.

The menu reads, “Young Piglet alla Paesana, Crushed Parsnips, Polenta Budino & Winter Savory,” and the plate smells like fat and acorns. A righteous bite of belly shatters like chicharron, and the shoulder is pale and soft as a baby’s fist, and there is a meatball made from smiles and oinks, and that rib chop, just charred—oh that rib chop!—perfect for picking up and gnawing. Taken with a dollop of corn custard and polenta, the piglet’s gurgling death rattle, a grotesque scream punctuated by periodic blasts of blood, tastes blissful and domestic. Like my housewife’s orgasm on the kitchen counter (her sundress spread round legs, the sink running and overflowing with root vegetable peelings), the piglet sloshes and shrieks his little death. After the main course, plates return clean except for a single bone. All that’s left of our very small animal is a pink striped shirt—slashed open over the heart and spattered with blood—stuffed in Del Posto’s trashcan.

Next night, I’m in Flushing, looking for rabbit. It’s nearly Christmas and there are a few festivities strung up, but the neighborhood goes about its ordinary, brusque business. The wind chill is zero and businessmen rush past food stands in favor of the train station. After dark, Flushing turns into one long drag of neon and fluorescence. It is Max Weber’s “Chinese Restaurant” incarnate, a fractured panel of brutal light made material. A homeless man wearing a stocking cap lies flat across the sidewalk, either dozing or dead. We step over him and ogle tangerines, cases of wild American ginseng ($3699/pound!), scallion pancakes puffing on a flat top; stop for a Peking duck sandwich; find Golden Mall; go subterranean.

Can you imagine Edward Hopper’s painting “Chop Suey”?—in the foreground, two pretty young things drink tea, wear cloches, breathe vampiric sunlight out of pale pale skin, drink tea, and behind them, a man in a suit faces his own cloched beauty. The scene is still. Even the brilliant sign (half-an-‘S’-‘UEY’) is, during the day, turned off. Motion is arrested. It is an image in-between heartbeats. In his characteristic fashion, Hopper has selected a moment of urban estrangement and magnified the psychological space between intimate persons.

But can you imagine Golden Mall?—in the background, families finished shopping slurp marrowbones, laughing women pinch dumpling skins, and everyone is sweating chili oil, drinking coke cans, wearing $29.99 winter coats and polyester hats, agitated and twitching and shouting in Chinese. The scene is frightening and ludicrous, uncontrolled, foreign, an uncontained impression that spills off the edge of a sentence.

We’re jammed into the last table at Chengdu Heaven eating ma la rabbit. Meat clings to thin bones. At first, we crunch through and wince, because we want to eat the peanuts and scallions and rabbit so bad, it’s so good. Spicy double-cooked pork is transparent bacon minus smoke, doused in oil and tangled like ribbons around hot green peppers. Ten steps away to Xi’an Famous Foods for spicy cumin lamb burgers. Packed in paper sandwich bags, the burgers feel more substantial than their size belies. They are greasy and heavy, the evil twin of my own (cleaner-cut) chili. Then, upstairs; we need something nutritious, a bowl of lamb soup, Hainanese. From one bowl we draw up curling flat noodles, clear noodles, wood-ear mushroom, and drink deeply of broth. We leave, mouths coated with lamb fat. A drug deal goes down in a basement passage.

In order to live a conscientious, critical life, it becomes necessary to locate the grotesque in the everyday and the everyday in the grotesque.  At a restaurant like Del Posto, which feeds on the droppings of finance and is an aesthetic expression of capitalized society, the methods of production are always disguised. Behind every beautiful mouthful is a world of violence. Manhattan life tends towards anesthesia; and even beyond this island of extraordinary luxury, bourgeois America has been flattened and made banal. Yet, beneath the homogenous skin of everyday experience is an exotic and bizarre collection of organs begging exposure. Simultaneously, the borders of the bourgeois map contain points of obvious irregularity—tumorous bulges around soft tissue, so to speak. In territories like Flushing, the bourgeois mind struggles to comprehend alterity and the alien. But instead of approaching the grotesque as grotesque, the alien as alien, we should reclaim the grotesque as human and rehumanize that which the anthropologist has degraded. We must pathologize our everyday lives and attack the “abnormal psychology” of transnationality. The suburb and the skyscraper must be rendered schizophrenic and Flushing must be allowed an independent instant of humanity. I am advocating for the radical humanist’s rehabilitation of modern living. We must learn to feel pain and pleasure again. Eat piglet, eat rabbit, and transcend the conventional wisdom of realism.

We had dessert in a flower shop. Soy Bean Chan Flower & Gift is Hopper’s stillness sans loneliness. There is a small stand next to the door. Order hot sweet soymilk. Sit at the single table. Time enough remains before the Seven and the trip back to blandness.

A Report on Vermont, Its Food, Its PeopleIn "Dining Suggestions"